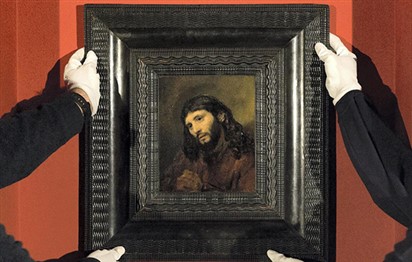 When Louvre Abu Dhabi opens its show celebrating the Dutch Golden Age on February 14, the exhibition will leave its mark.

The museum has acquired a rare oil sketch by Rembrandt, showing the Christ figure bent forward in thought. The study, Head of a Young Man in Prayer (circa 1655), will be on display for the first time during Rembrandt, Vermeer and the Dutch Golden Age: Masterpieces from The Leiden Collection and the Musee du Louvre, and will remain in Abu Dhabi on permanent view.

“Rembrandt was one of the history of art’s greatest storytellers,” Manuel Rabate, ­director of Louvre Abu Dhabi, says.

“With this latest acquisition, the first ever ­Rembrandt joining a museum collection in the Gulf, our visitors can experience the power of his creations first-hand.”

It is rare for a Rembrandt to come to ­market – most of the works are in institutional ­collections already – and this dark, brooding sketch from the master of psychological ­portraiture was only authenticated as such in the 1930s; before that it was thought to be by one of his pupils. It has been exhibited four times before coming to Louvre Abu Dhabi and was acquired last December at Sotheby’s ­London for nearly £10 million (Dh47.4m).

“The sketch is part of a group in which ­Rembrandt was looking for the right profile for depicting Jesus in a humanistic way,” says Rose-Marie Mousseaux, the chief curator of the museum. “You can see the ­intensity throughout the ­composition, and you can really feel it when you stand in front of the painting.”

Louvre Abu Dhabi’s latest ­exhibition explores the period of the 1600s, when the Netherlands enjoyed extraordinary trade hegemony. “The Netherlands in the 17th century was the first economic power, not only in Europe but in the world. Rembrandt and Vermeer were the sons of those halcyon days,” says Blaise Ducos, chief curator of Dutch and Flemish paintings at the Musee du Louvre, who co-curated the exhibition with Lara Yeager-Crasselt, curator of the Leiden Collection in New York.

The latter is an extensive private collection that focuses on artistic production from the Dutch city of Leiden in the 17th century. At 15 years old, it is relatively young, and has been assembled by billionaire couple Thomas S Kaplan and Daphne Recanati Kaplan at a quick-fire pace: in a 2017 interview, Thomas said they acquired a painting a week, on average, for about five years. Since that time, they have loaned out their Old Masters and toured selections of the holdings, from an exhibition at the Musee du Louvre in 2017, through stops in Russia and China, and finally to Abu Dhabi.

“Abu Dhabi is, in some ways, the ­culmination of a world tour,” says Yeager-Crasselt. “We began at the Louvre and we end in partnership with them at Louvre Abu Dhabi.”

Dutch Golden Age painting ­describes roughly a century of ­phenomenal artistic production, when Rembrandt, Vermeer, Frans Hals, and others, took to capturing the domestic surroundings and the social life of a country transformed by global trade. The painters worked to a high standard of naturalism, ­executing both history paintings and, influenced by Italian painting, ­Biblical and mythological scenes. They also paid close attention to ­everyday life, particularly Vermeer, in intimate scenes that chronicled an increasingly globally-aware society.

“Global exchange is a key premise of this exhibition,” says Yeager-­Crasselt. “Sometimes this is literal, with ­examples of Oriental carpets, African parrots, and Chinese ­porcelain. And, in a broader sense, we are ­looking at artistic exchange, which, at points, you can actually see ­happening between the different artists’ paintings.”

Cut from the same cloth

This idea of complementarity is not just a figure of speech. The ­exhibition at Louvre Abu Dhabi will feature two exemplary paintings that have been revealed to be cut from the same bolt of canvas: Vermeer’s The Lacemaker, owned by the Musee du Louvre, and Young Woman Seated at a Virginal (a type of piano), from the Leiden Collection, both painted from around 1669 to 1671.

“This is the only case, that I know of, where you can say that two Vermeer paintings are from the same bolt,” says Ducos. “It was a rather recent discovery. A few years ago there were images and X-rays of the painting which enabled you to count the thread of the canvas millimetre by millimetre. And by comparing the two images – that of The ­Lacemaker and that of the Virginal – you got a ­perfect match.”

The pair were first shown in the Musee du Louvre’s Dutch Golden Age exhibition in 2017, which featured the Leiden Collection of paintings, and here they will be exhibited next to each other for the first time.

“They both share stylistic ­similarities,” says Yeager-Crasselt. “But the connection goes beyond that – you can imagine Vermeer cutting the canvas from a large bolt ­somewhere in his studio.”

The Lacemaker is one of the most famous Old Masters, showing an ­upper-class woman absorbed in one of her leisure-time pursuits. “Vermeer introduces to painting a narrative, you start imagining what came before and what came after, and you start hoping for his young lady to lift up her gaze and look at you – and, of course, that’s what she does in the Young Lady at the Virginal,” Ducos says of the painting’s material cousin.

Domestic in scale, both paintings demonstrate Vermeer’s sensitivity ­towards light, which you can see ­falling on the women’s faces. This 17th-century attention towards light is always startling. It ­anticipates ­photography and auteur cinema of 200 years later, in that Vermeer’s degree of naturalism ­extended to a ­reluctance to artificially ­illuminate his subjects, just as later ­artists ­working with technological means often deliberately constrain ­themselves from doing.

Influence into the 20th century

Indeed, The Lacemaker also had an influential afterlife among ­modern artists, who looked to it as a ­forerunner of the 20th century’s ­interest in abstraction and self-­reflexivity, especially Salvador Dali.

“It is well known that Dali did many things with the Mona Lisa, but he considered The ­Lacemaker as the ­pendant in art history to the Mona Lisa,” says Ducos. “He is photographed in the Mediterranean swimming with Gala, his wife, and in his hand he is holding a large photograph of The Lacemaker and rolling his eyes – making fun of the painting, and using the reputation of the Old ­Masters to enhance his reputation.”

As the exhibition will show, ­Vermeer, Rembrandt and their ­associates were revolutionary in how they shepherded painting away from religious ­concerns and towards the fascination with everyday life that will culminate in modernism’s famed collapse ­between art and life.

The Rembrandt oil sketch acquired by Louvre Abu Dhabi, is exemplary of this bold tendency. The work comes from a group of sketches painted from a live model, which scholars believe was a man from the Jewish quarter of Amsterdam, the neighbourhood where Rembrandt lived.

“This young man was used by Rembrandt and his pupils as a model working after life in order to prepare representations of Christ in ­history paintings, which were the most prized output of the Rembrandt workshop,” says Ducos. “When we exhibited it in Paris in 2011, at the heart of our show was the idea of showing Christ after life, which is an oxymoron, of course. Christ after life – what can that mean? And what did that mean in the 17th century in ­Amsterdam? It was a way of showing how Rembrandt was original and daring.”

It is precisely this humanistic element that makes the oil sketch such a key acquisition for Louvre Abu Dhabi. “Here Jesus is presented like a human, and treated like a man in the 17th century – in a context of a huge revolution of religion, which is Protestantism,” says Mousseaux.

“It is really important for us at Louvre Abu Dhabi to collect such a figure, to figure out a new perspective in the history of iconography. It is part of our global ‘red line’ that runs through humanity to find out what has changed human perspective.”

Rembrandt, Vermeer and the Dutch Golden Age will be at Louvre Abu Dhabi from Thursday until May 18