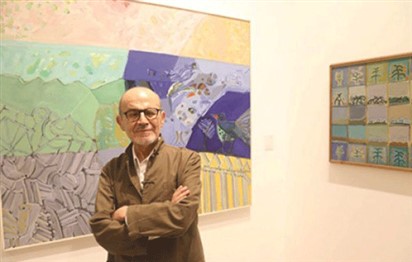 Lebanese plastic artist Amin El Bacha has passed away on Tuesday, February 5, 2019, after a long artistic career and numerous contributions to the Lebanese and Arab art scenes.

A statement released by the Lebanese Artists Association stated that the late El Bacha, who had been a member since 1957, was the face of Lebanon’s modern art. Moreover, many artists and officials, lead by Lebanese Prime Minister Saad Al Hariri lamented the death of El Bacha. “The departure of artist Amin El Bacha is a great loss for Lebanon, the Arab world and for the whole world. He was a pillar of culture and art in Lebanon. Beirut will certainly miss its son who conquered the world with his paintbrush,” Al Hariri tweeted.

Amine El Bacha was born in Beirut, Lebanon in 1932. He graduated from the Lebanese Academy of Fine Arts before pursuing his studies in Paris. Over six decades he kept an artistic diary of his city, Beirut, in water, oil, pastel and gouache colors, in addition to his sculptures. He was dubbed the “Beirutian”.

The late artist held and participated in tens of exhibition both in the Arab region and abroad, becoming an icon of modern art in Lebanon. His artworks have been acquired by various institutions, and organizations such as the Arab World Institute in Paris.