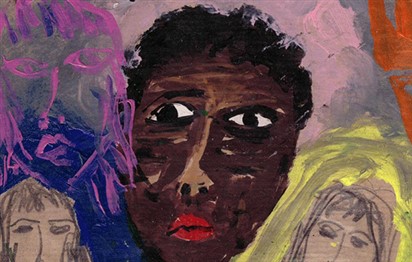 Hemsat [Whispers], the opening show for 2019 at Lawrie Shabibi in Dubai’s Alserkal Avenue is a real ­surprise: bright, ­expressive works by Egyptian ­artist Fathi Hassan, who – though he appeared in the ­Venice ­Biennale in 1988 – is ­little-known in the region today. That shouldn’t be the case. His works, from the ­explosive drawings of his 1980s “wild ­Neapolitans” phase, to the intricate ­calligraphy and drawings he is making today, deserve more attention.

Hassan paints boldly ­rendered faces, or makes lines of patterns that appear almost like small cities seen from above. Some works resemble posters, dotted with ancient hieroglyphics like advertisements for a Pharaonic ­cinema, or as if selling personal ­memories of the Nile. But there is always one constant: a vibrancy ­running through the works.

“It is an energy, a ­magnetic wave of the soul which ­encounters other magnetic waves on its way,” he says of his working process. “For me, painting is the desire to answer a question to which I can find no other way of replying.”

Hassan was born in 1957, in a Nubian community in Cairo. He worked there as an artist for a time, and then moved to Naples in Italy in the 1980s, when he won a grant to study ­painting. It was a vibrant time for the city.

“American Pop Art, the art of Joseph Beuys, Andy Warhol, Keith Haring, ­Richard Long, and Robert ­Mapplethorpe,” he says, all came to the ­Galleria Lucio Amelio, which became a focal point for avant-garde ­European and American artists. These artists’ ­anarchic ideas of happenings – a ­Warholian mixing of high and low, and the artist as impresario – spread through the Naples art scene.

“I was part of the ‘wild Neapolitans’ group, which arose in opposition to corruption and urban decay,” recalls Hassan. “I didn’t paint on walls but went into pubs and painted live, sitting with a canvas in front of me while people drank and listened to music. My group frequented a place in Naples called Diamond Dogs and I exhibited live there with the paint still fresh.”

It was at the Galleria Lucio Amelio that Hassan met New York graffiti artist Haring. After this encounter, Hassan’s work began to take on similarities to Haring’s with its stick-like figures. Hassan painted a tribute to Haring the night after the two met. That work isn’t on view in Dubai, but the show has drawings from his ensuing Remembering Haring series from 1984 and 1985.

‘Nubia represents my childhood and family’

Hassan’s work also folds in material from a different source: from the beginning, his paintings and drawings were an attempt to put the Nubian tales of his childhood on to paper. “The Nubian language is not written, it is oral,” he explains. “Therefore I would use lots of different signs and put them together as you would to create a rich tale, with incessant repetition.”

Block-like Arabic, almost Kufic calligraphy scrawls across his work, as well as symbols from his native landscape, such as palm trees, fish and sailing boats. His palette is often the tans and ochres seen in Sudanese painting; his ­figures are black Africans bearing expressions of vague worry or doubt.

“Nubia represents my childhood and family,” he says. “In my grandmother’s house, in the city of Toshka, there was a constant coming and going of relatives. That is where I smelled the familiar smells, observed, listened to voices, also while out playing or at school. They stayed inside me and then became united with those of Cairo when I lived there. I mixed everything, ­Nubian and Egyptian culture.”

The works in the show range from the mid-1980s to the present day. Some of the stand-out ones are the most recent, with Arabic script and small repeated symbols forming rows of patterns that make the works look almost cartographical. If, in the earlier works, you sense a desire to confront his nomadic identity head on, here he seems to have reached a slower, more concentrated pace: recording becomes a method of remembering.

Future, from 2012, becomes a city of little, tooth-like ­houses and urchin-like blooms nestled above “renew” – an evocative word for the Nubian community – and “build” in Arabic. Black veins branch off like waterways throughout the work. Head, from 2011, resembles a diagram of how a brain stores memory: the tightly rendered Arabic indeed tells Hassan’s memories, all segmented apart.

He has continued his ­journey north, having moved to Scotland, where his wife and son live. “I like the climate, the air of mystery of the land, the music and theatre,” he says.

But it’s clear Egypt has never left him, and it’s a treat to be exposed to his work in the region.

Hemsat [Whispers] is at Lawrie Shabibi in Alserkal Avenue, Dubai, until February 20.