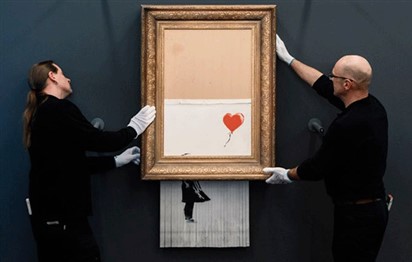 “Love is in the Bin”, the work by graffiti artist Banksy that shredded itself live after it was sold at auction last year, went on display at a German museum – after officials had made sure its shredding mechanism was no longer working.

The painting was originally auctioned as “Girl with Balloon”, the image of a young girl holding a heart-shaped red balloon that has become the artist’s most popular since it was first sprayed on to London’s Waterloo Bridge in 2002.

But the moment the auctioneer’s gavel fell, a hidden mechanism inside the frame shredded half the painting, which had just been sold for over a million pounds.

Museum director Henning Schaper said they had been anxious to avoid being the victim of another of the “subversive, clever” artist’s practical jokes and seeing the rest of the painting shred itself while it was in their charge.

“We opened up the frame and found the shredder machinery, the battery holders, the wires and satisfied ourselves that the batteries had been removed and the wires cut,” he said after curators wearing white gloves had carefully hung the work in its new place.

The owner, an anonymous European art collector, agreed to go through with the purchase of the painting, which the artist officially renamed after its shredding, and has now loaned it to the Frieder Burda Museum in Baden-Baden for a month.

The museum will not charge the public to see the painting. Schaper said that since Banksy was an advocate of the democratization of art and a street artist, it would be wrong to make the public pay to see it.

“We wanted to engage with his philosophy by hanging the art work where people don’t have to pay to get in and can experience Banksy’s art and join us in a critical debate on developments on the art market,” Schaper said.

The painting will be on display in the south-western city until March 3 before it is moved to the Staatsgalerie in Stuttgart, which will also not charge to view it.