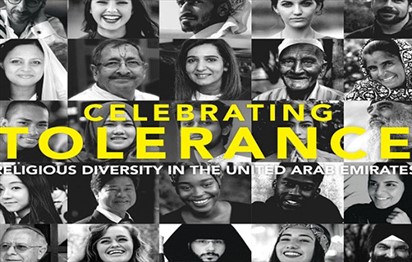 To coincide with the historic visits to the UAE by His Holiness Pope Francis and His Eminence the Grand Imam of Al Azhar Al Sherif, a new book celebrating the country’s diversity was launched on Sunday by the Minister of Tolerance, Sheikh Nahyan bin Mubarak Al Nahyan.Published by Dubai-based Motivate Publishing and entitled ‘Celebrating Tolerance: Religious Diversity in the United Arab Emirates’, the book was launched at a ceremony at the British Embassy, hosted by British Ambassador Patrick Moody.

In a Foreword, Sheikh Nahyan says that, ” Because we live so harmoniously together in the United Arab Emirates, we may suspect that our various religions might all value tolerance. This anthology serves the essential purpose of converting our vague suspicion into fact. That wonderful fact of tolerance deserves the celebration accorded by this splendid book. To ensure that the celebration never ends, we must communicate and protect the fact by always acting in the spirit of the fact. Without our active attention, tolerance can swiftly vanish. Let the essays in this book inspire tolerance in perpetuity.”

Edited by the Reverend Canon Andrew Thompson, Vicar of St. Andrew’s Anglican Church in Abu Dhabi, ‘Celebrating Tolerance’ is a compendium of the experiences of people from ten various faiths who coexist peacefully in the country. Many are of groups that first arrived in the UAE in the 1960s and 1970s as the country embarked on its programme of rapid development.

Explaining the book, Reverend Thompson, who has also authored ‘Jesus of Arabia’ and ‘Christianity in the UAE’, said that “The UAE has been home to people from diverse faiths. The book aims at celebrating this diversity and building greater understanding amongst communities on different rituals and customs. We have brought together ten faiths, including the Baha’i, Buddhist, Hindu, Jewish and the Sikh communities as well as the various sects of the Christian community, and we all look forward to creating a more loving and tolerant place for our future generations.”

Ian Fairservice, Managing Partner and Editor-in-Chief at Motivate Media Group, added, “At a time when there are so many misconceptions about people based on their beliefs, ‘Celebrating Tolerance: Religious Diversity in the United Arab Emirates’ is a step in the right direction to bring our communities closer together.”

“Reading will remain our shield against any challenges or difficult times”: Mohammed bin Rashid