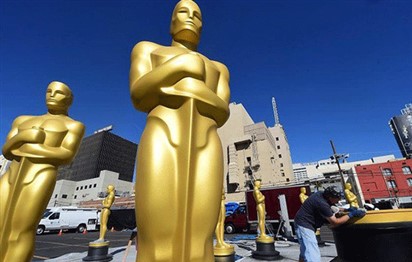 The Oscar nominations were announced on Tuesday, with Lebanese director Nadine Labaki scoring a nomination for her film, “Capernaum.”

Meanwhile, American-Egyptian actor Rami Malek was nominated for “Leading Actor” for his role as Freddie Mercury in in Queen biopic “Bohemian Rhapsody,” while breakout star Mahershala Ali scored a “Supporting Actor” nomination for his role in “Green Book.” Ali made history for being reported as the first Muslim actor to win an Oscar in 2017, for his role in “Moonlight.”

Actors Tracee Ellis Ross and Kumail Nanjiani announced the nominations at 5:20 a.m. in Los Angeles, as film critics, movie stars and producers and directors across the world set their alarms early to catch the eagerly-awaited submissions for Hollywood’s most coveted awards.

The show will take place on Feb. 24 and will see Hollywood’s cream of the crop go head to head.

Labaki’s “Capernaum” was widely expected to be nominated as it has been well received by international critics.

The gritty film, which won the 2018 Cannes Jury Prize, centers on a poverty-stricken child who sues his parents in protest of the life they have given him. Last year’s Oscar entry from Lebanon, Ziad Doueiri’s “The Insult,” also earned a nomination.

One of the most buzzed-about foreign language films this year, however, is “Roma” from Alfonso Cuaron — a black and white ode to his childhood in 1970s Mexico City that took home two Golden Globes, including best director.

The film was produced by streaming giant Netflix, which has come under criticism from its more traditional rivals for its strategy of massive online distribution of original content — and screenings in only a few cinemas.

“Roma” is the first Netflix film to vie for glory in major Oscar categories.

It was also nominated in the coveted “Best Film” category, alongside “Black Panther”

“BlacKkKlansman,” “Bohemian Rhapsody,” “The Favorite,” “Green Book,” “Roma” and “A Star is Born.”

Last year, the awards season was marked by the Harvey Weinstein scandal, and the birth of the #MeToo and Time’s Up movements against sexual misconduct and harassment in the workplace.

This year, multiple controversies are plaguing the Oscars — none of them related to last year’s bombshell.

In August, the Academy — under fire for being too elitist — announced it would add a “best popular film” award. But many saw the new category as a booby prize for blockbusters like “Black Panther” that would keep them out of contention for top honors.

The plan was scrapped a month later.

Then actor-comedian Kevin Hart had perhaps the briefest tenure ever as Oscars host — a few days. He withdrew after homophobic tweets he had written years ago sparked a crippling backlash on social media.

Of course, on Oscars night, the focus will revert to the nominees and the red carpet glamor.

Bradley Cooper, “A Star Is Born”

Lady Gaga, “A Star Is Born”

Melissa McCarthy, “Can You Ever Forgive Me?”

Centuries of Moon depictions on display in New York

‘Controversial’ Jacinda Ardern mural is under way in Melbourne