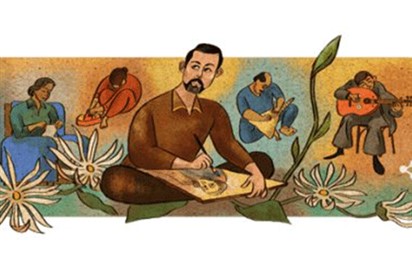 On January 20, 1934, Louay Kayali was born in Aleppo, Syria. The young boy began painting when he was just 11 years old and held his first exhibition at age 18. He then went on to become one of the region’s most well-known contemporary artists.

Kayali may have been born in Syria, but he trained in Italy. His “quietly powerful portraits convey the strength, resilience and nobility of everyday folk,” Google explains. His subjects were bakers, fishermen, even pregnant mothers.

In 1956, Kayali moved to Italy, where he enrolled in advanced studies at the Academy of Fine Arts in Rome. He also represented his home country at the prestigious 1960 Venice Biennale.

He joined the faculty of the Higher Institute for the Fine Arts in Damascus in 1962; “Kayali’s instruction made a profound impact on future generations of Syrian artists,” adds Google.

Later that decade, he began exploring the use of charcoal in his work, and in 1967 his travelling exhibition Fi Sabil al-Qadiyyah (For the Sake of the Cause) “depicted human suffering, reflecting upheaval in the Arab world”. Unfortunately, the show received scathing reviews and Kayali destroyed much of his work.

The 1970s saw him return to painting, however, and he even worked on a joint exhibition with his old friend, the celebrated Syrian artist — a leader in Syria’s modern art movement — Fateh al-Moudarres.

Yet Kayali, who was known to suffer from severe depression, tragically died in a fire aged 44 in what some have deemed a suicide, according to the Barjeel Art Foundation.

Today’s Google Doodle can be seen across the Gulf, in the UAE, Oman and Saudi Arabia, as well as across North Africa, and much of the Levant.

Elsewhere in the world, Thai dancer Manlee Kongprapad, born in Bangkok on this day in 1885, is also being celebrated.