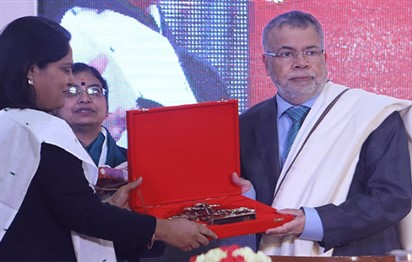 The New Delhi World Book Fair organisers honoured Emirati poet and journalist Dr. Habib Al Sayegh, Secretary General of the General Union of Arab Writers, and Chairman of Emirates Writers Union, for his great contributions to the UAE and Arab cultures during at the opening of its 27th edition where Sharjah is being hosted as guest of honour.

The Emirati poet addressed the Indian writers and intellectuals in attendance, saying:”
An Indian man named Kudsi visited me once in the UAE’s Writers Union in Abu Dhabi. Unknown to me before, the man said that he came to bid me farewell after 34 years of service in Abu Dhabi Investment Authority (ADIA), adding that he feels guilty for not learning Arabic. “Don’t you speak Arabic at all?” I asked. He said, unfortunately no. I asked Mr. Kudsi, “Can’t you even order a meal in an Arabic restaurant?” He shook his head politely, adding, “That’s why I came today to bid you farewell and to request some books and novels by UAE writers that may be later translated into Hindi.
Mr. Kudsi wanted to translate friendship, brotherhood and love into action. We are here in New Delhi today to do the same thing.
Going back to the relationships between India and the UAE would take us deep into the past. India has always illuminated our individual as well as collective memory with such a bright ray since the word “travel” used to mean “India” for our forefathers. It was as if India was our outside world; as if Mumbai, Delhi and other Indian cities and regions were our gate to the open world, to peace and to freedom. This is India; a genuine part of our love and our lives; a persistent existence in our lives, our writings and our creativity. And here we are, an elite of UAE writers and intellectuals, coming to New Delhi and its International Book Fair within the Sharjah delegation and with direct directives from His Highness Dr. Sultan Bin Mohammad Al Qasimi, Member of the Supreme Council, the Ruler of Sharjah and the Honorary Chairman of the UAE Writers Union, to seek closer relations and deeper understanding within the distinguished, strategic relations across all fields and sectors between India and the UAE. When political, economic and social ties become ripe and fruitful between friends, they are usually crowned by enlightened and systematic cultural relationship. This is what we are doing now at this particular moment.
Let’s call it a moment of perseverance and commitment, and let’s work together to address any possible sense of guilt due to any shortcomings in our mutual cultural relations, including mutual visits and cultural exchange. Let’s translate our mutual love to work and hope. We have so much in common, and we came today to the country which was greatly loved by our founding father, the late Sheikh Zayed Bin Sultan Al Nahyan. We came to be closer to you, to know you better and to wage love against you!
We trust that this historic moment is not just a passing event, and that it will establish the playground for the future. We are sure that we have more beautiful days to come. However, genuine passions are not enough. They should be bolstered by action.
As Mr. Kudsi translated into Hindi his love to the UAE’s land, people and earth, we have lots of love, appreciation and gratitude to translate into the same language.
One difference should be mentioned, though. I received Mr. Kudsi five years ago without knowing him before, and he bid me farewell without knowing me before. But today, I receive you one by one and I know each and every one of you. India has such a warm winter, and such a uniting umbrella that accommodates all big hearts.
Thank you. We will always meet for the common good.
www.sharjah24.ae
3
3
Shares

Stop the local media from bleeding – By: Abdul Hamid Ahmad