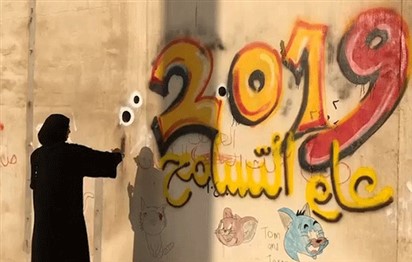 With a high artistic taste, a passion for painting and colour-loving arts, a number of drawing enthusiasts managed to transform an abandoned factory in Kalba into an artistic arena where painters scramble to take their artistic energies out of the factory, into a shrine frequented by art lovers at all times.

Between a professional and an amateur, a number of young art lovers in the city of Kalba, go to an old factory on the outskirts of the city, to compete through the embodiment of their artistic talents, which caught the attention of a large segment of the people of the city.
The story began with an initiative launched by the painter Amina Hassan, from Kalba, who was the first to apply the colours of art on the walls of the concrete factory, to be followed by a number of girls, and then the circle expanded to include a number of young people also.
Amina Hassan says that the old ice factory, opposite Al Qarm Nature Reserve, had always captured her attention every time she took the nearby road. The idea was to create colorful murals that would break the darkness and tranquility of its abandoned building.
At the beginning, Amina began to make simple paintings, through which she sent messages implicitly and sometimes directly, in order to drag people’s feet to the place, which she felt oppressed and miserable.
Her plan succeeded and her paintings began to attract visitors slowly to see the paintings of the anonymous painter. Amina did not leave any sign revealing her identity, a step that encouraged the painter Aisha Al Marashda to experiment in turn, to grow the dream and increase the turnout of painters and art lovers, in parallel with the commoners.
Gradually, the number of painters increased from 5 to 7 males and females. The paintings ranged in colour from the traditional brush or oil painting to the stencil and the graphite. After growing interest in what became an open plot, the anonymous artists unveiled themselves and the deserted factory regained life after a long sleep.
The participants in this remarkable work aspire to have the plant sponsored and cared for by the concerned agencies, hoping to become an incubator of graphic arts’ lovers one day.
www.sharjah24.ae

Louvre to open one Saturday night a month for free