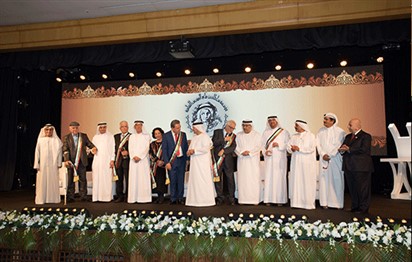 The Sultan Bin Ali Al Owais Cultural Foundation has concluded an eventful year of cultural, artistic, intellectual and musical activities that have reflected the authentic identity of the Foundation. In 2018, the Foundation hosted a wide array of events both in the UAE and abroad, which saw the participation of leading Arab intellectuals, thinkers and artists and attracted a wide audience of culture enthusiasts and fans. In addition, the Award Distribution Ceremony of the 15th session of the Sultan Bin Ali Al Owais Cultural Awards was held on March 28, 2018 at the premises of the Foundation in Dubai.

Throughout the year, the Foundation hosted a number of seminars and symposiums such as the “Zayed and the Cultural Dimension” symposium, which was held on the occasion of the UAE national day and the Year of Zayed, and hosted a constellation of intellectuals, writers and academics. The Foundation also hosted the “Popular Poetry Festival” in collaboration with the Poetry Media Center in Kuwait, which featured a number of the most prominent Nabati poets, and the “Cultural Security” forum, in cooperation with the Abdul Hamid Shouman Foundation in Amman, Jordan, which saw the participation of a constellation of Arab and Emirati intellectuals. Moreover, the Foundation organized a symposium on late poet Abdullah Al Bardouni under the title of “The Farsighted Poet”, which shed light on the life and poetry of the late poet. Similarly, the Foundation hosted a symposium on late poet on late poet Muhammad Mahdi Al Jawahiri as part of the Foundation’s tradition to celebrate winners of previous sessions of Al Owais Cultural Awards by organizing symposiums to shed light on their thought and creativity.

On the other hand, the grand exhibition hall of the Sultan Bin Ali Al Owais Cultural Foundation has hosted many exhibitions by prestigious artists from the UAE and beyond, including “Zayed, Words of Gold”, a plastic art exhibition by artist Khaled Al Tabaa, “The Language of Sculpture” exhibition by artist Anas Al Alousi “Migration Memories” by artists Amer Al Obaidi and Iyad Al Mousawi, and finally “Jawhara 2” by veteran artist Fatema Lootah.

The theatre of the Sultan Bin Ali Al Owais Cultural Foundation also hosted a number of musical activities and concerts, including a gala concert by vocalist Najat Rajawi that concluded the Award Distribution Ceremony of the 15th session of Al Owais Cultural Awards. Moreover the Foundation also hosted a gala concert under the title of “Ya Mal Al Sham’, featuring vocalist Abboud Basheer. Furthermore, the Foundation wrapped up an eventful year of artistic and cultural activities with a concert featuring vocalist Yusra Mahnouch.

“Al Jawahiri as a Contemporary Poet”: A Symposium on the Legacy of Muhammad Mahdi Al Jawahiri at Al Owais Cultural Foundation