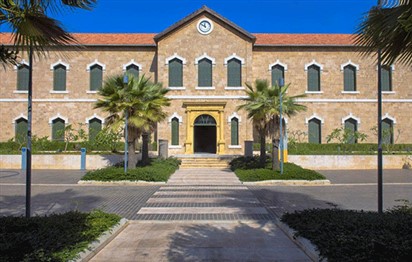 The Lebanese National ­Library is on the verge of reopening to the public after 40 years, having shut its doors during the Lebanese civil war. Its collection of more than 300,000 publications have been painstakingly restored over almost two ­decades and are now housed in an imposing red-tiled ­Ottoman-era complex built ­between 1905 and 1907 under the reign of ­Sultan Abdulhamid II.

The new library, which is located opposite Sanayeh Garden in Beirut, was inaugurated by Lebanese President Michel Aoun earlier this month, before it closed for maintenance. It will open to the public in the first week of January. The Ottoman building originally housed a hospital, an arts and crafts school, and then the Lebanese University’s law faculty.

It was allocated as a new home for the library in 1999.

What to expect inside

The new library building ­includes three large, climate-controlled basement rooms for the collection. “Our stacks are underground where we have the best possible conditions for conservation,” says Gelnar Atoui Saad, executive director of the library. “We are a library and also a cultural centre, so we have an auditorium, we have many multipurpose rooms for workshops, conferences and exhibitions, and we have a big reading hall for the public, as well as another one for researchers who will be accompanied by a member of our team.”

The library’s unique collection contains more than 300,000 documents in multiple languages. “We have many rare books and a very special collection of Arabic periodicals. We have Arabic, English, French, Italian, Spanish, Armenian, Syriac – many languages,” says Atoui Saad.

As well as books, manuscripts, rare documents and periodicals, the collection includes paintings, government publications, maps and plans, music scores and postcards. The newer collection also includes CDs and DVDs, and the library facilities will include computers, internet access and printers. Members of the public can sign up for a nominal fee – which has yet to be finalised – allowing them to make use of the facilities and peruse the collection – materials cannot be taken offsite.