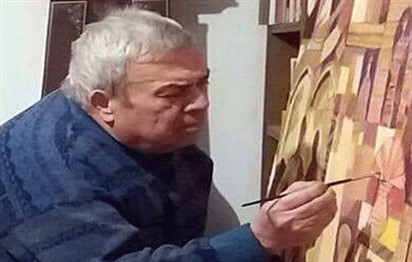 Syrian plastic artist Waheed Maghariba has passed away in Aleppo (his birthplace) on Monday, December 17, 2018, after a long struggle with illness. He was 76.

The late artist had been honored last Wednesday by the Ministry of Culture at the opening ceremony of the Plastic Art Days 2018 event.

Maghariba was born in 1942 and obtained a degree in photography from the Academy of Arts in Rome in 1978. He held more than 20 solo exhibitions in Syria, Italy and Lebanon, and took part in tens of group exhibitions and received many awards from Syria and Italy.

Some of Maghariba’s most notable works include the illustrations of the “History of Medicine” book by Dr. Sulaiman Qataya, which was published in Paris in 1968. He also contributed to illustrations in two London-based publications.

Maghariba’s artworks have also been acquired by various Arab and foreign museums and galleries and are part of several private collections in Syria, Italy and different Arab countries.

Many artists lamented the departure of Maghariba, including veteran artist Saad Yakan, who posted the following message on his Facebook page: “Maghariba, my only friend has departed, leaving us to gather memories of his real creativity that overwhelmed our hearts with love and beauty. Farewell silent fighter.”