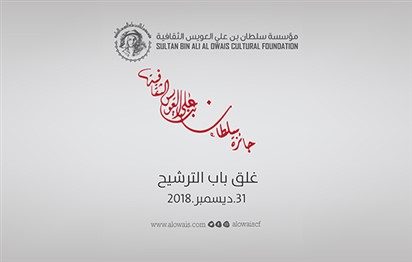 The Sultan Bin Ali Al Owais Cultural Foundation has announced that nominations for the 16th session of Al Owais Cultural Awards (2018-2019) will close at the end of December 2018. The Foundation also announced that the total number of candidates hitherto nominated in all categories of the Award is 1745, while the number of nominations in each of the categories is currently as follows: Poetry 304, Short Story, Novel and Drama 436, Literary Studies and Criticism 276, Humanities and Future Studies 480, Cultural and Scientific Achievement 249.

The Sultan Bin Ali Al Owais Cultural Foundation had sent out more than 6,000 nomination forms and invitations, as well as 6,000 information packages about the Foundation and the Al Owais Awards to most universities, academies, cultural institutions, literary associations, and to some authors throughout the Arab world, so that nominations and applications may be included in the 16th edition of Al Owais Awards (2018-2019).

Al Owais Cultural Foundation to Host “Hope Triumphs and Dreams Persist”: A Webinar on Saadallah Wannous, on May 25-26, 2021