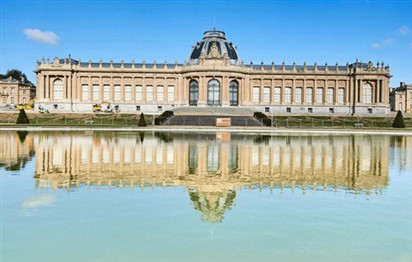 The Royal Museum for Central Africa has just reopened after a renovation. But does it properly serve the growing African community in Belgium?

Something had to be done about Belgium’s Royal Museum for Central Africa. Its palatial premises built by King Leopold II at the end of the 19th century were filled with dusty stuffed animals and art objects “collected” during military campaigns or by explorers and missionaries. Its permanent exhibition hadn’t changed since the 1950s and it had been given the shameful moniker of the “last colonial museum in the world”.

Five years after closing down for a €74 million (Dh307.2m) renovation, and almost two decades after the idea of decolonisation was first mooted, the museum, which is located just outside Brussels, reopened last Sunday with a reorganised permanent exhibition that takes a far more critical view of Belgium’s colonial project.

“Colonialism as a system of ­governance is based on military occupation, authoritarian and racist rule and on exploitation of a country,” says Guido Gryseels, the museum’s general director, during a tour.

In practice, the museum has shifted from being “an exhibition of dead objects in an Africa without history and human beings, to a living ­exhibition on contemporary Africa”, according to the permanent ­collection’s chief curator Bambi Ceuppens. Exhibits are brought to life through the testimonials of Africans (or people of African descent) and the interactive items can now be touched, as well. Interspersed among the displays are colourful and often political artworks by contemporary African artists.

Themes covered in the renewed spaces include rituals and ceremonies; landscapes and biodiversity; languages and music; and the resource paradox. There is also a room dedicated to the African diaspora, with films, books and documents.

The animals are still there, but presented within the recreated biomes of central Africa, while photography and films show the role agriculture, fishery, climate change and nature conservation play in the region. Long gone are the days of dioramas and “portraying Africa as if no people live there”, says Tine Huyse, curator of this section. Importantly, there is a room on Congo’s long history that covers the periods before colonialism and after independence.

‘We don’t want to erase history’

There’s nothing to be done about the building, however. It remains a listed monument extolling the glories of colonialism with hall after hall filled with maps of colonial gains and triumphant inscriptions of achievements that can’t be taken down or removed. In recognition of its overbearing presence, visitors now enter the museum via a glazed contemporary pavilion by Belgian architect Stephane Beel and walk through an introductory area that explains how the institution’s objects were obtained, many “captured in violent clashes”.

It is here that you also find a space titled “Sidelined”, where a collection of colonial statues from the museum’s former exhibits are displayed in haphazard style as if in storage. These include the particularly egregious early 20th century sculpture by Paul Wissaert, featuring a masked African man wearing a leopard skin about to attack another man asleep on the ground. On the wall is a 2002 painting by popular Congolese artist Cheri Samba, which depicts a group of Africans pulling the “Leopard Man” statue down the steps and out of the museum, while its white staff are trying to pull it back inside. It’s a humorous take on a difficult issue and, juxtaposed with the jumble of ­offensive sculptures, it’s a powerful and self-critical statement of intent.

This room came about in part on the advice of a group of African diaspora experts who worked with the museum, and is headed by Congo-born Billy Kalonji, who says that if the statues were disposed of entirely, there would have been a “revolution”. Kalonji hopes that one day, they will be removed completely, but in the meantime, he believes: “If the public is made to understand what happened and what we are fighting for, then they will support us. We don’t want to erase history.”

‘I didn’t want to play the politics of victimhood’

Elsewhere, the revamped Africa museum, as it is now known, tries to contextualise, clarify and counter the building’s loaded historic colonial messaging with texts or artworks by African artists. So in the Great Rotunda, which used to have a bust of Leopold II at its heart and is still clad in marble and surrounded by gilded statues that represent Belgians as benefactors with plaques reading “Belgium bringing civilisation to the Congo”, there is now a large-scale timber head of an African man made by Congolese artist Aime Mpane out of chiselled wood. “The idea is that when you arrive, you see the profile of the figure and are seduced by its form and material and everything else becomes secondary,” he explains.

The act of putting an African at the heart of this deeply symbolic space is quietly subversive no doubt, but like many of the new additions, it was not without controversy. “At times, there was so much tension, I could have said I didn’t want to do it anymore,” says Mpane. “But I didn’t want to play the politics of victimhood, and complain but then do nothing.”

The African diaspora committee of experts has also tried to evolve over time and move from being a consultative entity to a more effective and permanent participant in the museum’s decision-making process. This has been met with resistance, Kalonji says openly. “At times, we have [people] say: ‘is this just a box-ticking exercise, or is it a serious endeavour?’”

The negotiations between the museum and African committee are ongoing, but momentum is arguably on the latter’s side. This year has seen one of Brussels’ municipalities elect its first African mayor, and a new square dedicated to the first democratically elected prime minister of independent Congo, Patrice Lumumba, who was murdered a few months after getting into power, was inaugurated in Brussels this summer.

‘It’s impossible to change everything at once’

Some African and Belgian activists also say the museum hasn’t gone far enough, that the only solution is to abandon the building and give back the collection. Certainly the memorial gallery is a disappointment and missed opportunity. Walls inscribed with the 1,508 names of Belgian soldiers who died in the Congo have been countered with the names on the windows opposite of some of the Congolese killed in Belgium during the notorious “human zoo” exhibits at Belgium’s world expos. When the sun shines on the windows, the Congolese names are projected below the Belgian ones. It’s a nice idea, but it doesn’t do justice to the brutality of Leopold’s private army and the millions of Congolese lives lost due to forced labour, starvation, fighting and disease.

The museum staff say the decolonisation process is just beginning, and that they are also working with Belgium’s Ministry of Education to ensure colonialism is taught properly in schools. Nevertheless, the institution is sure to face many more controversies down the line, not least demands for restitution of looted objects, one made just last week by the current Democratic Republic of Congo president, Joseph Kabila. The Congolese haven’t had “the capacity” until now to present and store work says Gryseels, but this is set to change with a new national museum planned to open late next year.

Senegal has also just opened its monumental US$30m (Dh110.1m) Museum of Black Civilizations, which opened in Dakar, thanks to major funding from China – seen internationally as a major campaign for Africa to reclaim its art.

50 days to inaugural of Sharjah as World Book Capital