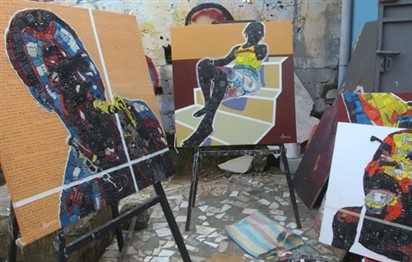 Desire Koffi often walks through Koumassi, a popular district of Ivory Coast’s main city Abidjan, to collect old mobile phones that he buys from people for 500 CFA francs ($0.8726) a pair.

Back home, the 24-year-old Ivorian artist dismantles the phones with a hammer to pull out the screens and keyboards. He uses them for his paintings. One can take him up to three or five days of work.

Koffi grew up in Koumassi and says he was drawn to recycling and incorporating e-waste in his art, after seeing how it affected his environment.

“My number one goal is to try, in my own small way, to reduce electronic waste that is found in the streets and in the bins,” he said.

“Here, we are in one of the city’s most popular neighborhoods, where you usually find old phones which can no longer be repaired.”

With a population of about 5.5 million, Abidjan generates up to 1,500 tons of e-waste per year, according to the European Union-funded E-waste Implementation Toolkit. Koffi says a significant amount of this waste can be used to make money.

With several exhibitions abroad and at home under his belt, Koffi is quickly becoming one of Ivory Coast most important figures in contemporary art.

“I think his work is great. He has decided to go into recycling, and it really suits him because his work stands out from all others,” fellow Ivorian artist Ezechiel Guibe said.

“Despite incorporating recycling material into his work, he manages to capture all these forms, faces and emotions in his work, which really blew us away,” added art gallery director, Olivier