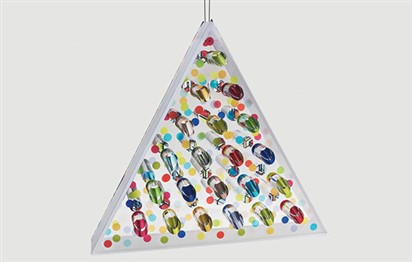 ‘I think the UAE is a good place to exhibit my work. It is abstract, it is creative and it appeals to the imaginative spirit,’ she says

The three circular sculptures that greet visitors to Irene Zundel’s Beyond Reality exhibition at Dubai’s Art Hub Gallery play with the very notion of reflection. Made on bases of mirrored glass and with multicoloured protruding test tubes creating patterns within the discs, the viewer sees their own image in the first circle and then when reaching the central disc – thanks to the angle of the glass – that reflection disappears. It is an optical illusion, the kind that many of the works in the show utilise to draw in the audience. But it is also a symbolic touch, something that Zundel hopes will work as a prompt towards introspection.

“The act of making my viewer disappear is me trying to say to them, ‘you already know you exist, you don’t need to judge yourself or others’. It has a kind of spiritual dimension,” she says.

Beyond Reality is an exhibition that asks for viewer participation. The 12 works are mostly made of vividly coloured Plexiglas and acrylic with glass and mirrors to aid their reflective capacity. They are mostly three-dimensional sculptures and many of them are kinetic, such as Divergence – a transparent pyramid hanging from the ceiling with a geometric panelled pattern set within the object on each of its four flat faces.

“I want people to find themselves in each piece as well as lose themselves,” says Zundel. “The idea of using kinetic art is to ask people to move physically around the object as it also moves. They will use the objects to relate to themselves and it is my hope that they will go deeper to find what is beyond the apparent, both within the artwork and within themselves.”

Beyond Reality is an itinerant exhibition, which first showed in Venice in June 2017 and, later that year, in Madrid. In February, the work was displayed in the Mexican Cultural Institute in Germany and this iteration marks the first time Zundel’s work has been shown in the Middle East. “I think the UAE is a good place to exhibit my work. It is abstract, it is creative and it appeals to the imaginative spirit,” she says.

It also appeals to the pervading aesthetic of geometry that is entrenched into the region from its roots in sacred Islamic tradition. Geometric art is innately satisfying to the eye and universally appealing. Combined with the attraction of Zundel’s choices of material and colours means the exhibition is easily accessible to all viewers whatever their cultural background.

Despite admitting her work is received differently all over the world, Zundel says she rarely thinks about nation or geography when it comes to her audience. It is true that elements of her Mexican heritage could be attributed to her love of vibrant colours and expression of joyfulness but the artworks are as much about balance and equilibrium as they are about her chosen palette.

In Discrepancy, another work based on the triangle, each side of the shape is covered in Plexiglas tubes. Looking at the piece head on, it appears flat, but as it swings from its ceiling wire, the tubes emerge like sharp spikes. Zundel says that this piece is based on the unpredictability of human emotions. “Just as a small child can be happy one minute and crying the next, our emotions are constantly changing, even though it doesn’t appear that way on the surface. That is what gave me inspiration for this work.”

Talking to Zundel and spending time with the pieces leads me to conclude that she is trying to capture the complexity of the human experience in each seemingly simple construction. It has taken her years of exploration to devise these artworks and a dedication to her reflective materials to achieve them.

“When I began my career, I used to work with bronze and with rounded shapes and duller colours, I think it was because I was exploring myself. Now I feel that I am in a happy place and want to externalise all that I have learnt. I think my works are a combination of my life and the texture of colour that I grew up with, as well as a general invitation to reflect upon yourself both physically and metaphorically.”