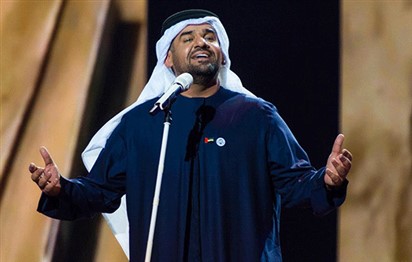 Emirati singer Hussain Al Jassmi will make history on Saturday when he performs at the Concerto di Natale in Vatican City.

Al Jassmi will become the first Arab artist to perform at the annual Christmas concert, which is now in its 26th year.

The singer announced the news to his legions of fans on social media, saying he was “honoured” by the invitation.

“With tolerance and peaceful co-existence, we, leaders and citizens, honour Zayed’s vision. My style is to embark on promoting interfaith and affinity among people,” he wrote.

“I am honoured to meet the Vatican’s invitation to be the first Arab artist to participate in the annual Christmas charity event which proceeds will benefit the refugees in Erbil, Iraq, and Uganda.”

The Emirati singer is perhaps the UAE’s most popular musical export and is one of the Middle East’s top-selling artists.

He was popular as a judge during the third season of The X Factor Arabia, and serves as a UN Goodwill Ambassador, and the Ambassador of Creativity and Ambassador for Arab Culture in the UAE.

In 2016, he became the first Emirati – and the first Arab – to perform at Dubai Opera. He is adept at fusing musical genres – elements from traditional Arab pop, 1990s R&B and even acid jazz are all present on his first three albums – and seamlessly shifting from singing in his native Emirati dialect to Egyptian, Moroccan rai and English.

When he takes to the stage on Saturday, he will be in good company, joining a formidable line-up of big-name acts.

Last year, Annie Lennox served as the headline act for the 25th edition of the concert.

This year, the concert aims to shed light on the plight of refugees. Funds raised from ticket sales will support charities who provide aid to refugees in Uganda and Iraq – Don Bosco Mission in Uganda, which helps resettle those fleeing the war in South Sudan, and the Scholas Occurrentes Project in Erbil,which aims to connect university students in Italy and university students in refugee camps.

The concert will take place on Saturday (December 15) at 6.30pm, in the Paul VI Audience Hall in the Vatican.

The Vatican Christmas concert has been held annually since 1993, inviting Italian and international artists to perform free of charge to support charitable causes.