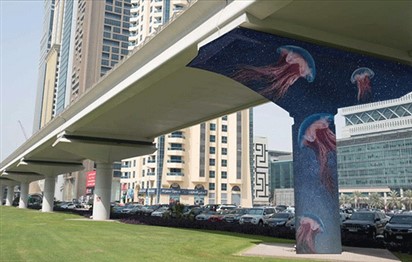 From Karama to Satwa, and JLT to City Walk, street art has popped up across Dubai in the past few years, and there’s a new project to get excited about: the Dubai Metro Murals Project.

This initiative, run by Brand Dubai, will see some of the pillars that hold up the Dubai Metro painted by two international artists, Peruvian Daniel Cortez and Dominican-born, Miami-based Elio Mercado, known as Evoca1. These two artists will paint the pillars in between the DIFC and Emirates Towers stations, with work on the project starting today.

Brand Dubai and RTA have recently signed an MoU to beautify the city’s roads and transport systems over the next three years, so we can expect plenty more projects like this in the future. The artworks and initiatives will pop up across the city’s tunnels, bridges, bus stops, walking tracks and more.

Elio Mercado, who will be part of the metro project, was also involved in the huge mural near Al Raha Mall – here is his contribution to it:

He is particularly known for his beautiful portraits:

Danial Cortez is also known for his figurative work, however he adds a huge dash of the colourfully surreal to his pieces. Here is one of his works in Morocco:

“Arab Girl” a spark that glowed since beginning of light, shone when light had prevailed: Sheikha Fatima