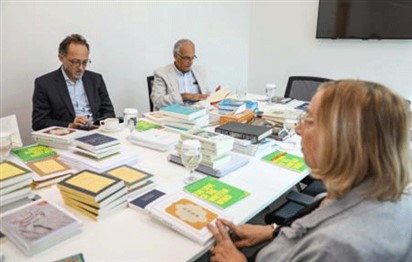 The Sharjah Translation Award ‘Turjuman’, the world’s largest translation award organised by the Sharjah Book Authority (SBA), recently announced that the second edition received 50 entries which were submitted by a number of Arab and international authors from 17 countries.

The Board of Trustees of the award held a special meeting to assess the submitted entries and will announce the winner at the opening ceremony of the 37th edition of the Sharjah International Book Fair (SIBF), which runs from October 31 to November 10 at the Sharjah Expo Centre.

HE Ahmed Al Ameri, Chairman of SBA, said: “Turjuman is one of our efforts, which aligns with the vision of His Highness Sheikh Dr Sultan bin Muhammad Al Qasimi, Member of the Supreme Council and Ruler of Sharjah. The award aims at promoting Arabic titles globally by stimulating international translators and publishers to communicate titles written by critically acclaimed and renowned Arab authors to global readers, which contributes to enhance cross-cultural communication.”

“Since its inception, the award has contributed to expand the scope of Arabic publishing giving international readers access to Arabic books and allowing them to explore the Arabic literary legacy. It also played a vital role in supporting the promotion of Arab culture and civilization through the Emirate of Sharjah, which has become a cultural destination for intellectuals from around the world.” he added.

The Spanish publishing house Editorial Verbum won last years’ edition of the award for translating and publishing ‘One Thousand and One Nights’, a book comprising of four medium-sized volumes (500 pages each) from Arabic into Spanish. The book was translated into Arabic by Ibn al-Muqaffa, during the golden-age of Arab culture.

The Turjuman Award was launched under the directives of His Highness Sheikh Dr. Sultan bin Muhammad Al Qasimi, Member of the Supreme Council and Ruler of Sharjah, to stimulate international translations that rely on the human achievement in its cultural and intellectual aspects and use it as a foundation upon which the human civilization and cross-cultural communication between the east and the west is built. Turjuman is dedicated to supporting serious publishing that can emphasize the role of the word and bolstering creative ideas that can drive the global cultural scene forward towards the desired integration