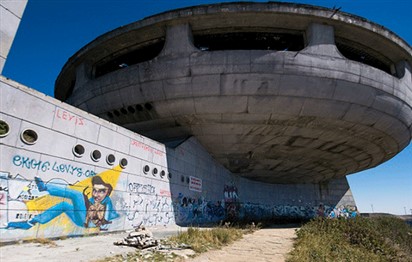 Perched like a vast flying saucer on a central Bulgarian mountainside, Buzludzha is a brutalist concrete monument that was built to glorify communism nearly 40 years ago.

The striking circular building has been left to fall victim to vandalism and decay, as Bulgaria has been eager to forget its communist past, but now western experts want to preserve it as a heritage site.
The 70-metre (230-foot) high structure — made of 70,000 tonnes of concrete, 3,000 tonnes of reinforced steel and 40 tonnes of glass — looks like it is hovering at around 1,400 metres above sea level.
It has a 40-metre-wide ceremonial hall with room for 400 people and was covered from floor to ceiling in mosaics depicting the history of Bulgaria’s communist party.
Inaugurated in 1981, it fell into disrepair following the collapse of the Iron Curtain in 1989 and now lies empty and crumbling.
In recent years, only the most adventurous foreign tourists have visited the isolated spot, prompting local authorities to lock it up to prevent any accidents.
Nevertheless, experts from cultural heritage organisation Europa Nostra visited the site last month and have urged the Bulgarian authorities to rescue what they believe is “a masterpiece of architecture, engineering and art”.
www.sharjah24.ae