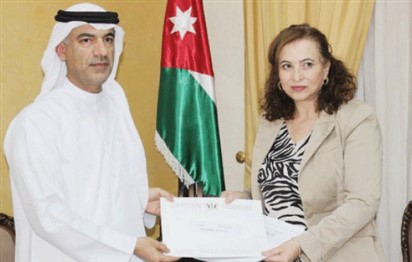 The Jordanian Minister of Culture welcomed the initiative of Sheikh Dr. Sultan bin Mohamed Al Qasimi, Supreme Council Member and Ruler of Sharjah, to hold the 16th edition of the Sharjah Narrative Forum in Amman, Jordan.

The annual forum, which is organized by the Department of Culture in Sharjah and focuses on the art of narration, is  aimed at promoting literature and the arts and sees the participation of Arab critics, writers and novelists.

Moreover, the Jordanian Minister of Culture hailed other initiatives by His Highness Sheikh Dr. Sultan bin Mohamed Al Qasimi, Supreme Council Member and Ruler of Sharjah such as hosting the Arab Theatre Festival in 2012 and the opening of the Poetry House in Mafraq Governorate (2015).

For his part, Abdullah Al Owais said that Amman was selected to host the 16th edition of the Sharjah Narrative Forum due to its prominent cultural capital in the Arab world, pointing out that this decision was in line with the initiative of His Highness the Ruler of Sharjah to expand the boundaries of the Sharjah Narrative Forum and bring it forth to other Arab cities.