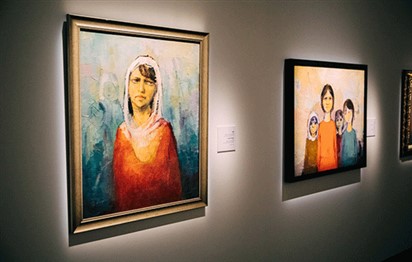 Saeed Al Nabouda, Acting Director-General of Dubai Culture, said, “We are delighted to launch this unique retrospective by Emirati artist Abdulqader Al Rais which will provide a vantage from which the audience may be exposed to the UAE’s thriving art sector and its global skills. The event will contribute to consolidating relations between the United Arab Emirates and France, and will support the prospects for cooperation between the two countries in various fields, mainly in arts and culture.”

The exhibition will provide a comprehensive display of over 50 of the artist’s works spanning from the 1960s until today. It will cover various periods in the artist’s career, from his time in Kuwait to his current life in Dubai.

Considered one of the pioneers of contemporary art in the Arabian Gulf Region, Abdulqader Al Rais played a pivotal role in enriching the nation’s arts scene. The artist created a special painting for this exhibition titled ‘An Eternal Spring’ to celebrate the ‘Year of Zayed 2018’ initiative, and, in honour of this unique exhibition, he will present one of his masterpieces from his ‘Serenity Series 2017 – Watercolour on Paper’ as a gift to the Arab World Institute.

Coinciding with the ‘Year of Zayed 2018’ initiative in the UAE, the event reaffirms the cultural legacy of the late Sheikh Zayed Bin Sultan Al Nahyan and his role in consolidating relations with France since his first official visit to the country in July 1975. In recognition of his great role, the Arab World Institute prepared a historical film about the UAE and Sheikh Zayed in May 2016 entitled ‘Sheikh Zayed … An Arab Legacy.’ This was a remarkable and unique execution within the activities of the Institute as a gesture of appreciation for his peace-loving personality, tolerance, and understanding among the people of the world as well as for his fundamental support for the establishment of the Institute and the teaching of Arabic in France.

Al Nabouda added, “We hope this retrospective will contribute to enhancing the cultural exchange with France, especially when it comes to joint initiatives and activities. We also hope it will further enhance cultural and creative cooperation to make the cultural and arts sectors the main components of the Emirate’s overall economy, supporting the city’s status as a thriving cultural capital that attracts talents and visitors from around the world.”

In addition to the exhibition, a number of panel discussions will be held in which some of the UAE’s arts and culture enthusiasts and VIPs will participate, while Abdulqader Al Rais will organise a panel session and hold a live-drawing session for visitors. On 14th October, exhibition visitors will have the opportunity to take part in a panel discussion on Dubai’s growing art landscape and available platforms that support artists and artworks from the UAE and abroad.

Founded in 1980 as a collaboration between France and 22 Arab countries, the Arab World Institute was established in Paris to serve as a tool for introducing and disseminating Arab culture, and to develop knowledge of the Arab world, launching an in-depth research into its language, cultural, and spiritual values.

Dubai Culture aims to enhance Dubai’s cultural scene and draw attention to the UAE’s rich heritage with a variety of initiatives that take place throughout the year. The Authority’s mandate is to build bridges of constructive dialogue between different civilisations and cultures through enriching initiatives that benefit the Emirate’s citizens, residents, and visitors. The Institute awarded the title of ‘Cultural Personality of the Year’ at the twelfth edition of the Sheikh Zayed Book Award earlier this year also aims to promote exchange and cooperation between France and the Arab world, especially in the fields of science and technology, to contribute to the development of relations between the Arab world and Europe.