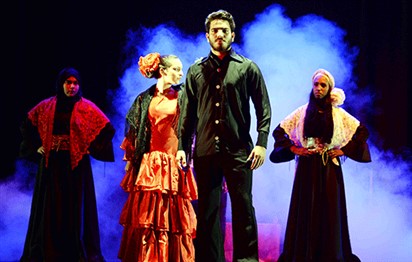 Preparations are currently underway for the 7th edition of the Short Play Festival, which will run from September 26 to 30 at the Theatre of the Cultural Centre in Kalba. The Festival’s Reviewing Committee had recently selected 10 plays to compete for the awards of the new edition of the Festival, out of 20 plays that had applied for participation.

The Festival will also be accompanied by a cultural symposium, which will run under the theme of “Short Plays between Text and Performance”, and will discuss similarities and differences between short plays and multi-act plays. Moreover, the symposium will shed light on how the length of the theatrical text affects how it is directed, recalling the popular view about short plays being literary texts as they are more easily read than performed. On the other hand, the symposium will also discuss how the conciseness, terseness and intensity of the short plays makes them more accessible to the audience of the theatre, and also makes them akin to experimental theatre in terms of direction. Furthermore, the symposium will also lay forth two important questions:

It is worth mentioning that the symposium will see the participation of Marei Al Halyan (UAE), Heba Barakat (Egypt), Noufal Al Azara (Tunisia), Khaled Al Janabi and Hisham Shakeeb (Morocco) as well as Reda Jassem and Haleem Hatif (Iraq).