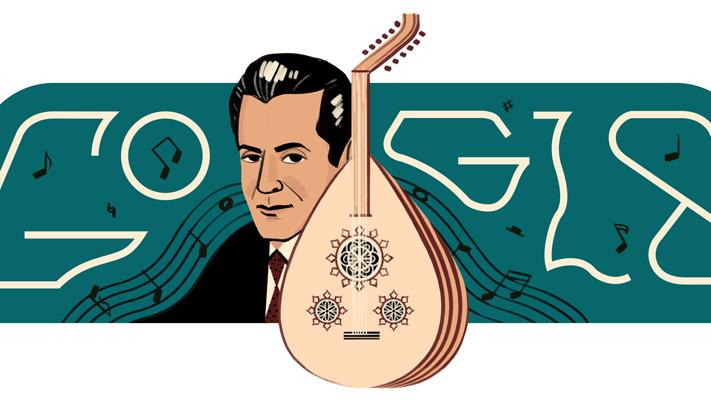 The illustration marks what would have been his 110th birthday, on October 19, and can be viewed in parts of the Middle East and North Africa.

Considered one of the Arab world’s greatest performers of his time, he recorded more than 500 songs and starred in 31 musical films during his career, which spanned more than four decades.

Al Atrash was born in 1910 in Al Qurayya in southern Syria to a Syrian father and Lebanese mother. When he was young, the family emigrated to Egypt to escape the French occupation and later became Egyptian citizens. Al Atrash was musically inspired by his mother, who sang and played the oud.

He found success as a musician and composed a diverse catalogue of songs. One of his most unusual and distinguishable traits was his voice, which was high and mellow at the start of his career and evolved into a wider, deeper sound. Some of his famous songs include Rabeeh (Spring), Awel Hamsa (First Whisper), Hekayet Gharami (Story of my Love) and Ya Zahratan Fi Khayali (Flower of my Imagination).

In addition to his musical talent, he also rose to fame as an actor, making his big-screen debut alongside his sister Asmahan in a 1941 film called Intisar al-Shabab (The Triumph of Youth). He went on to lead a massively successful film career during what is known as Egypt’s golden age of cinema over the following decades. He starred in 31 musical films until 1974. His last movie, Nagham Fi Hayati (Songs In My Life), was released after his death.

He was also sometimes referred to as “king of the oud”.