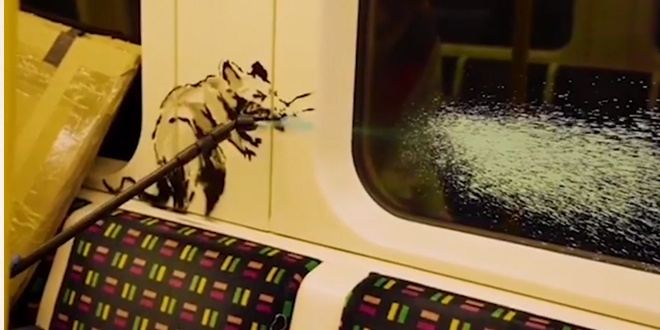 A coronavirus mural painted by world-famous street artist Banksy has been cleaned off a London Underground train, apparently by cleaners who did not understand its significance.

The cleaners did not know who had painted the pro-mask message on the inside of a London Tube train and treated it like any other graffiti, the BBC reported.

Banksy uploaded a video titled If You Don’t Mask – You Don’t Get on to his Instagram page on Tuesday.

It shows the reclusive artist wearing protective gear and spray-painting pictures of rats sneezing on the inside of the train to illustrate how not wearing a mask helps to spread Covid-19.

It was not immediately clear how long the work was actually on the train.

Some people have criticised the cleaners and Tube operator Transport for London for removing the painting, while others praised them for diligently doing their job.

Others suggested the mural was an act of publicity and that Banksy knew the work would not be in place for long.

“It was treated like any other graffiti on the network,” a transport authority source said.

“The job of the cleaners is to make sure the network is clean, especially given the current climate.