Look through the photo gallery above to see the winning submissions.

The theme for the competition, which took place throughout May, was faith. The winners hailed from Saudi Arabia, Bahrain, Iran and the Philippines.

His award-winning photo was taken after an earthquake in the Kermanshah Province, in western Iran, in 2017. He says this is “where the region’s residents seem to believe in God’s worth and destiny despite the severity of the event. In this photo there is a husband and wife praying among the ruins.”

It was the first time he’d won an award for his work.

“It will contribute greatly to introducing me and my photos to the world,” he said in a statement. “I aspire to create a positive impact through peace and friendship among the nations of the world.” 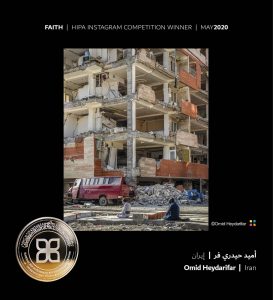 “I was taking a group of pictures of the pilgrims and suddenly this man appeared and booked the place in front of Ibrahim’s Maqam at the appropriate moment.”

Similar to Heydarifar, this is the first time Alibrahim has won an online photography competition. “I am very happy,” he says. “My inspiration and ambition are boundless, and this win will give me a very strong push forward.” 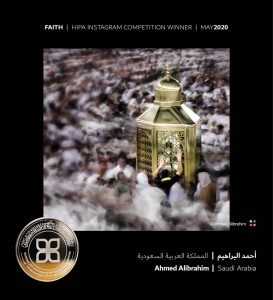 The other winners were Jassim Mohamed Alshakhoori from Bahrain, and Rene B Bernal and Mark Athony Agtay, who both hail from the Philippines.

The competition marked the holy month of Ramadan and invited photographers from all over the world to submit work based on their own ideas of faith. “Ramadan was a global occasion to open the door to different photographic experiences to translate the concept of ‘faith’ through the language of imagery,” said Ali bin Thalith, the secretary general of HIPA.

“It provided photographers with the opportunity to reflect and express a topic that is both diverse and dynamic.”

The organisation runs monthly competitions on Instagram. In June, the theme is “shadows” and they’re inviting photographers to submit works in monochrome.

More information is available at www.hipa.ae