A Thai street artist has been paying tribute to the fight against the coronavirus with murals depicting a winged-character dressed as a health worker looming over a spiky image of the virus restrained by a padlocked red cross.

The 37-year-old street artist who goes by the name ‘Mue Bon’, which translates as restless hands, says his murals also serve as a reminder that efforts against the virus are not over and everyone has a role.

“I want to play my part in reminding people about the situation and recording the history that we helped each other by staying home to stop the spread of the virus,” he told a section of the media

Mue Bon hopes his artwork, which usually contains a social message, will reach people who otherwise might not have access to galleries or other places to see art.

“There is a huge gap between art and the ordinary people,” he said, taking a break from spray-painting a wall.

“I put the artwork on the streets, at places where people sitting in cars will see it while driving past.” 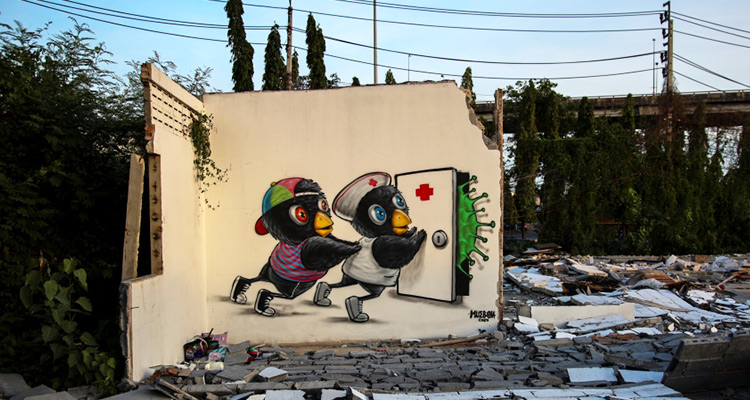 While not a household name in Thailand, Mue Bon has had international success and his work has been displayed in Japan, the United States, Germany, and, most recently, in the Palestinian Territories.