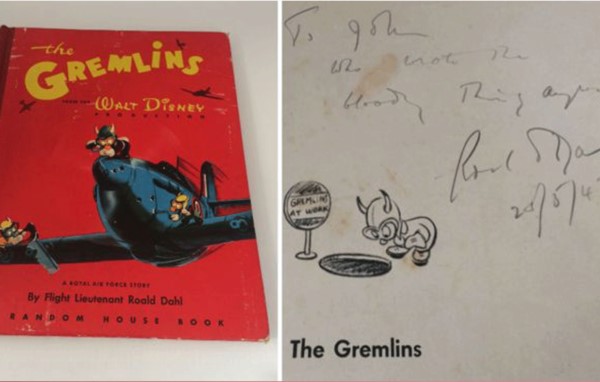 A rare first edition of Roald Dahl’s book, The Gremlins, is due to go under the hammer in an online auction.

It includes a personal note given to Dahl’s Second World War RAF comrade Wing Commander John Alexander which suggests he offered some inspiration.

The story is about little creatures responsible for various mechanical failures on aeroplanes.

The book, discovered by Hansons Auctioneers, is expected to reach about £4,000 at auction in May.

It said the book, which also contains pencilled corrections by the author, is one of only 50 published as prototypes for Dahl’s personal distribution.

Walt Disney wanted to make a film based on the 1942 book but it never came to fruition.

Mr Alexander’s daughter, Juliet, 75, from Ontario, Canada, said her mother, Joan, and two sisters grew up in Llandaff in Cardiff and played with Dahl’s sisters. They also knew Dahl.

“How coincidental, then, that later my father and Dahl served together in the RAF during the Second World War,” said the retired teacher.

Her father later joined the British Overseas Airways Corporation (BOAC) and moved to Canada in the late 1950s.

“As the only living family member left in Canada, and without heirs, my intention is to ensure now that this copy earns the status it deserves, whether it be to an avid collector or a Dahl museum,” said Ms Alexander.

“I do know both my father and Dahl were rather cavalier about the whole Gremlins project, especially as Disney did not ultimately make the movie for which the prototype book was originally intended.”

Jim Spencer from the auctioneers said the book was a “remarkable collector’s item”.

“Not only does it take us back to Dahl’s early days as a published author, that personal note provides an insight into the warmth of his character and regard for a wartime friend,” he said.