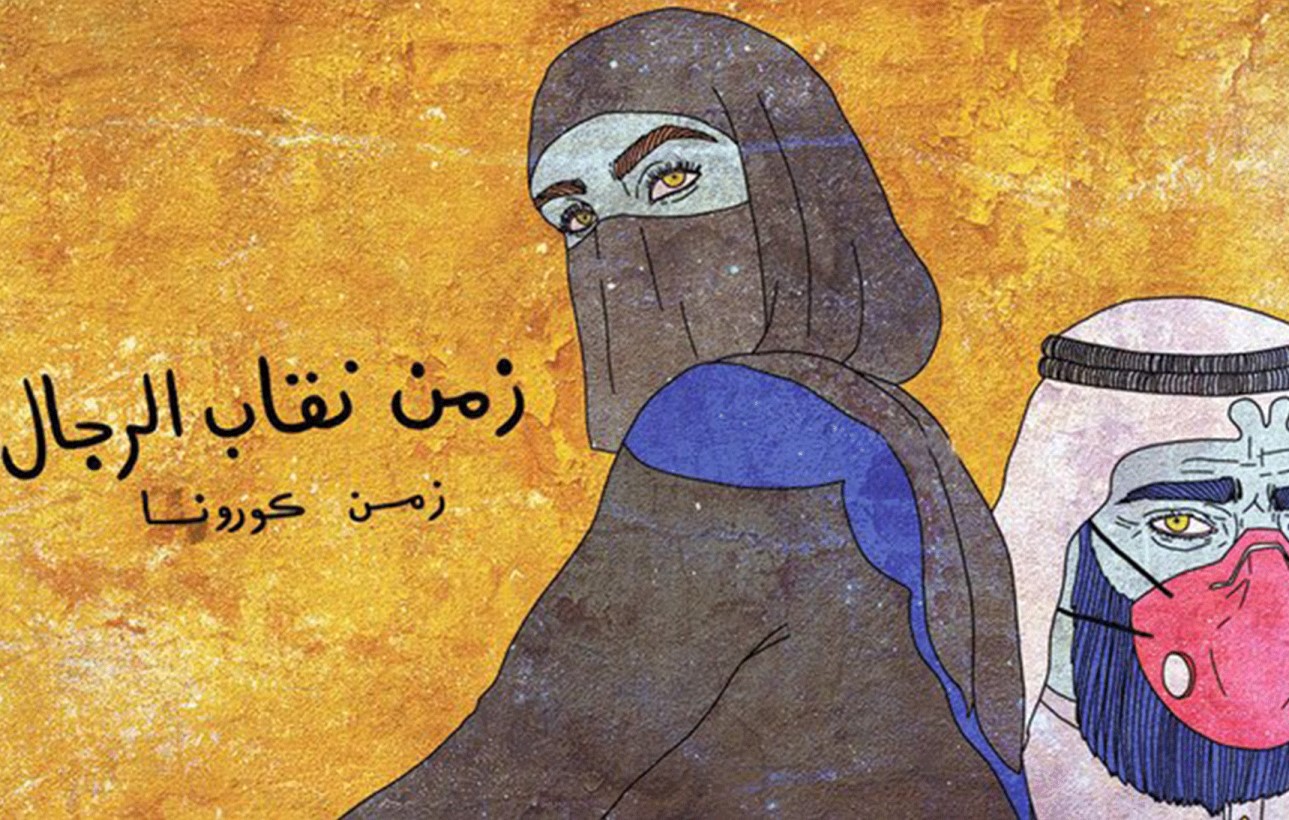 Everything is changing as the coronavirus disease (COVID-19) rages on. Humanity is facing the biggest global crisis of this generation, where the impossible has already happened and things have suddenly overturned.

The current crisis has imposed radical changes on the way people practice daily life. Even the simplest acts of love, compassion and solidarity have taken new forms that are completely strange from what humans used to consider normal, whereas the greatest act of love is to stay away from your loved ones.

Consequently, art and music production has also been affected. Arab artists are using their talents in different ways to enhance community connections, spread awareness, express appreciation and document history.
Saudi artist Lina Amer has used her art to document the effect of COVID-19 on the religious practices of millions of people around the world.
Saudi Arabia closed mosques for the customary five daily prayers as well as Friday congregations in March, many other countries took similar measures. Amer pictured mosques’ prayer carpets printed on the human heart with the caption “Pray at home, March 2020.”
Across Muslim countries, the call for prayer has partly changed, muezzins had to replace the penultimate part of the adhan — “Hayya Alasalah” (come to the prayer), with “pray where you are,” or “pray at home.”
Interpretations of sacred texts can change too in the time of the pandemic. Concept artist Yasmin (@yasmintoon) used a verse from the Qur’an that tells the story of the two sons of Adam, Able and Cain, to refer to the danger of handshaking as a greeting norm during the COVID-19 pandemic.
The verse reads: “If you will stretch forth your hand towards me to slay me, I am not one to stretch forth my hand towards you to slay you surely I fear Allah, the Lord of the worlds,” (5:28)
While Asma Khamis (@a0sma.k), Omani painter and graphic designer, chose to send more than one message in her work where she substituted a sanitizer for an engagement ring.

I hope that artists play a positive role in this difficult period because it is unfortunately very stressful and uncertain.

“First, I wanted to express how brides feel, whose weddings were postponed or canceled because of the crisis,” Khamis told Arab News, adding: “It is intended to console those women by reminding them that sacrificing their special day indicates a high sense of responsibility towards the health of the community.”
Khamis also wanted to say that sanitizers have become more important than jewelry because they help to preserve health. There is no more valuable gift than sanitizer because they are rarely available in the market.
Regardless of the obvious downside of this crisis, artists like Khamis see that it has given them two important things: “It has given us the time and a new problem, which is a new space for work and inspiration.”
Other artists used their work to express their appreciation to health workers, like Bahraini artist and art director Sayed Al-Majed (@almajed.art).
Al-Majed pictured a medical staff member raising their hand with the victory sign using the line drawing technique, which he said “indicates interdependence, coalescence and unity between humankind, and the line ends with the heart symbol which indicates life, love, giving as well as gratitude to health workers.”
The circle represents Earth with its population under one roof.
Al-Majed said: “I believe that artists have an ethical and societal responsibility to devote their art in facing this crisis by spreading awareness and extending thanks and appreciation to the defenders of all humanity at this stage of our lives: Health workers.”

Sanitizers have become more important than jewelry because they help to preserve health.

Amal Al-Ajmi (@al.up2sky) from Kuwait agrees with Al-Majed that artists should use their art to spread awareness but she added that art has to be an antidote to the growing sense of alienation, isolation and anxiety. “I hope that artists play a positive role in this difficult period because it is unfortunately very stressful and uncertain,” Al-Ajmi told Arab News. Al-Ajmi decided to use art as to declare an ironic statement, by drawing a Khaliji woman wearing niqab and a man covering his face with a mask adding the caption “it is the niqabi men era.”

Her work comes after a tweet by a Saudi influencer who wanted to promote niqab as obligatory for Muslim women said: “People are racing to buy masks to protect them from corona, while Islam discovered the treatment a 1400 years ago when it ordered the wearing of Niqab to as a protection against viruses.” The tweet went viral and was deleted days later after it received a lot of criticism.
Michelangelo’s legendary painting “The Creation of Adam” will always find its place in every trend and will forever inspire artists and internet meme creators. Ibrahim Al-Baker (@ibxrm) reconceptualized the painting by adorning one hand with henna as it reaches from behind the door to the hand of her lover who holds a sanitizer.
Al-Baker used a sentence from a popular Khaliji song and reworded it saying, “I stand at your door bewildered and sanitized.”
Similarly, collagist Razan Al-Naas (@razangryffindor) from Libya used the same hands from Michelangelo’s painting to place them under a huge sanitizer bottle, to resemble how suddenly sanitizers gained an existential meaning and an intrinsic value.

Artists have an ethical and societal responsibility to devote their art in facing this crisis by spreading awareness.

In the same sense, designer Anas Al-Absi (@anas.alabsi.design) has placed the sanitizer in what Michelangelo depicted as God’s hand outstretched to Adam.
In another piece, Al-Nass explained how quarantine measures are not new for people living in war zones, “In Tripoli, you can’t spell quarantine without war.”
On the social impact of the pandemic, Moroccan artist Ichraq Bouzidi pictured how distancing has impacted society’s hospitable social habits, especially the Atay or Moroccan mint teatime, which is central to social life.
Bouzidi pictures two Moroccan neighbors continuing their teatime tradition though the windows, socializing while maintaining social distancing. One woman appears to pour traditional mint tea from her window to her neighbor’s cup reached out from the other window and the caption reads, “Confinement Story: So close no matter how far.”
The piece also reflects another important phenomenon that appeared during the crisis, which is the revival of the use of windows and balconies in different societies around the world.