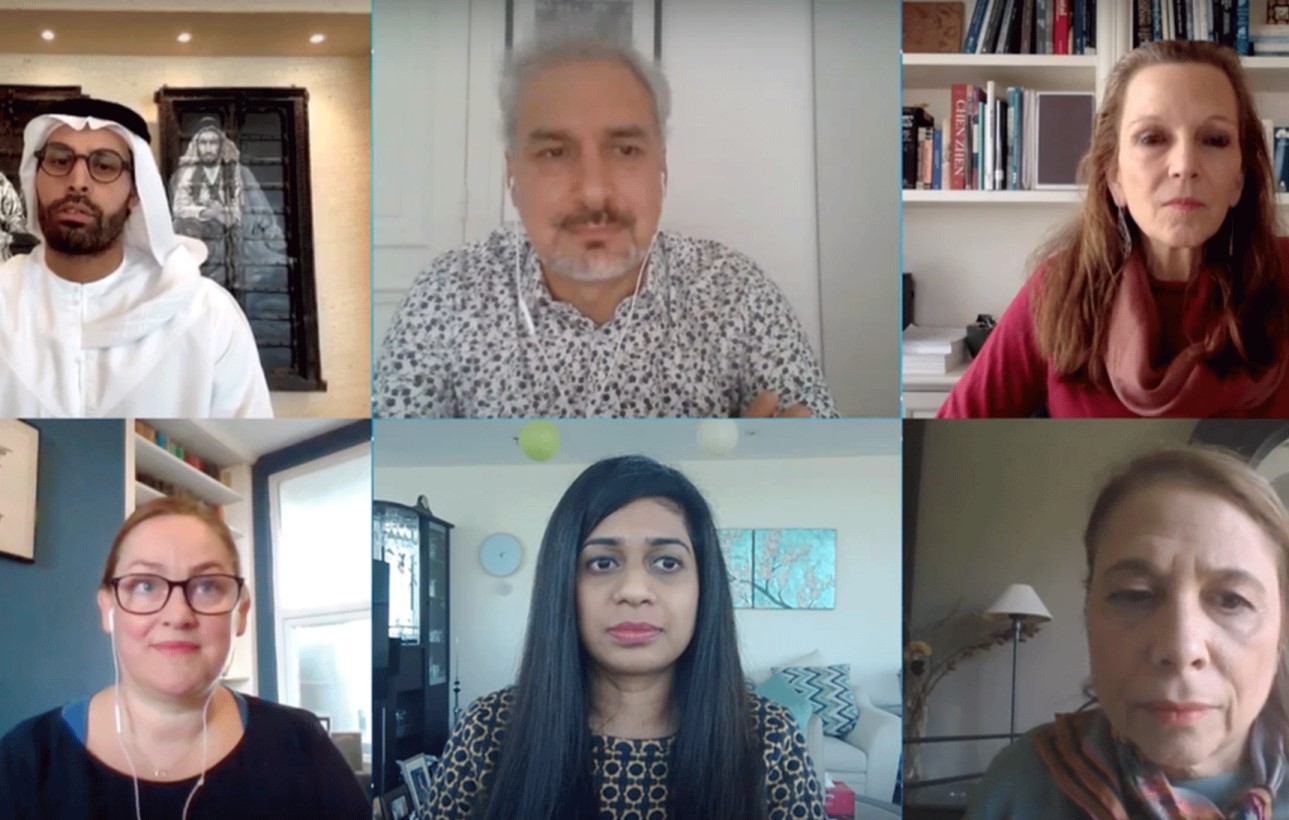 The creative and cultural sectors will need to fight to stay relevant to ensure their survival in the fallout of the coronavirus.

This was the message from a panel of international experts who met online for the 2020 iteration of the Culture Summit Abu Dhabi, broadcast as a special panel discussion via its YouTube channel on Thursday evening.

This year’s summit was originally scheduled to take place on Sunday, April 5, but was cancelled amid the Covid-19 outbreak.

The summit brought together Ernesto Ottone Ramirez, assistant director-general for culture at Unesco; Alexandra Munroe, a senior curator at Solomon R Guggenheim Museum and Foundation; Rebecca Lyons, director of collections and learning at the Royal Academy of Arts; Melanie Noronha, a senior editor at The Economist Intelligence Unit; and Marisa Henderson, chief of creative economy at the United Nations Conference on Trade and Development.

Al Mubarak began the session by admitting that the live streamed summit was a complete “first” for him.

He described the decision to cancel this year’s event as “really tough” and “disheartening” for him, however, he was determined to ensure the online event went ahead.

“In this time of great anxiety and isolation, culture provides a sense of purpose and solace,” Al Mubarak said.

“We’ve seen during these difficult times how powerful culture can be. It is a medicine.”

In discussing the impact of the pandemic on the cultural sector, Ramirez said it had hit “very, very hard”.

It had hit every aspect of the industry, too, he said, from artists’ ability to create to the production process to distribution and access.

“Artists are not able to make ends meet,” he said.

Museums and cultural centres were also losing millions in revenue and having to let go of staff. This extended to every type of institution, in both developed and developing countries, and the creative economy would be entering uncharted waters in how it would respond to both the current lockdowns, and the financial crisis that would come after.

Ramirez also announced that Unesco would launch an initiative on April 15 called Resiliart, bringing together industry representatives and artists to see how society can respond to the crisis. A week later, Unesco would bring together ministers of culture from around the world, to decide on a way ahead for the creative industry at policy level.

“We need to find a solution for the crisis we are living right now, but also the crisis that comes after,” he said.

“This will completely change our landscape. We need to rethink a way of financing culture to make it more resilient to crisis.”

Munroe, speaking on behalf of the Guggenheim, affirmed that “culture is not in crisis”.

“It’s our institutions and the platforms and the artists and performers, they are the ones who are in crisis,” she said.

The Guggenheim would be affected financially as it is entirely dependent on public philanthropy and endowments and has lost revenue due to a lack of ticket sales and that philanthropy.

“People are choosing to give [money] to the medical system, and how can we argue against that? I would say our biggest challenge is to stay relevant and to be relevant, and to find new ways to be relevant.

Over the last three weeks, the Guggenheim had repurposed its content to share across its social media channels, she said, which had enabled them to “reach audiences at unprecedented scales”.

“So solitude is good for some forms of cultural content,” she said.

However, Munroe stressed the need to “curate” what was being developed for online platforms to maintain an authentic experience.

While she believed the museum would be able to reopen quickly and nimbly once the pandemic died down, she said attendance was likely to be severely affected for a long time, as well as their ability to conduct roadshows and international-scale events.

“This moment has shifted our understanding of globalisation to not as something negative or destructive but actually about shared humanity,” she said. “Culture cannot be decoupled from society and from community. It is not an industry, it’s not an entertainment, it’s not a commercial venture, it is an encounter.”

Lessons learnt from the pandemic would also affect how they approached the formation of Guggenheim Abu Dhabi, she suggested.

Lyons, on behalf of the Royal Academy of Arts, said it was particularly hard for organisations like theirs, which was entirely reliant on revenue generation and received no government funding.

This meant focusing on “flexibility, adaptability and being nimble”. This would involve lobbying those who decided on public policy on how to fund cultural institutions, and trying to keep people afloat in the immediate pandemic aftermath.

“It’s a huge challenge for us to think about how to retain our friends and retain our audiences in the absence of any revenue streams,” she said.

“Resilience comes hand-in-hand with imagination, and I think it’s something that will see us through in all sectors, not just cultural.”

Going forward, cultural content would also need to be collaborative, which often meant utilising tools like social media as a way for audiences to “talk back”.

Henderson agreed, saying that countries must support one another and promote solidarity as the pandemic forces the world into a recession.

“Jobs in creative industries are some of the most vulnerable. Protection for creators will be very important.”

The speaker’s session concluded with a discussion around building up the industry so it would learn from the pandemic, and lessons could be learnt for next time.

“We need to have the tools to future-proof culture,” Al Mubarak said.

He also announced during the panel that the next Culture Summit Abu Dhabi would take place in March 2021.

The summit was followed with a line-up of live streamed musical performances, led by American Grammy Award-winning artist and producer Desmond Child. The event also featured a performance of Min Makan, an original instrumental Arabic fusion song composed by Jordanian violinist Yarub Smarait in collaboration with alumni from Berklee College of Music’s campuses around the world; as well as a cover of Fairouz’s Ya Tayr (Oh Bird) in English.
www.thenational.ae