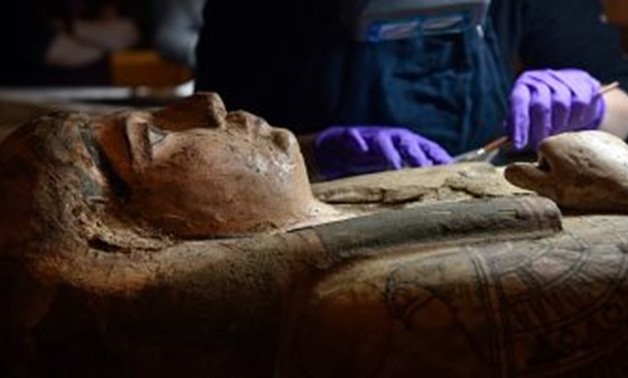 Scottish conservators discovered paintings inside the coffin of an Egyptian mummy which is nearly 3,000 years old named Ta-Kr-Hb pronounced ‘takerheb’.

The Egyptian mummy who believed to be a priestess or princess from Thebes was lifted out of her coffin for the first time in more than 100 years.

Scottish conservators made the discovery during work to conserve the Egyptian mummy.

Conservators found painted figures of an Egyptian goddess on the internal and external bases of Ta-Kr-Hb’s coffin.

The figures of both the internal and external bases of the coffin are representations of the Egyptian goddess Amentet or Imentet, known as the ‘She of the West’ or ‘Lady of the West’.

‘’It was a great surprise to see these paintings appear. We had never had a reason to lift the whole thing so high that we could see the underneath of the trough and had never lifted the mummy out before and didn’t expect to see anything there’’ Dr Mark Hall, collections officer at Perth Museum and Art Gallery, told the PA news agency.
Further research will be performed pertaining to the paintings to know more about the history of the Egyptian mummy, which most probably date from somewhere between 760 and 525 BC.

The painting on the interior base of the coffin trough was previously hidden by Ta-Kr-Hb and is the best preserved of the two.

It shows Amentet in profile, looking right and wearing her typical red dress.
Her arms are slightly outstretched and she is standing on a platform, indicating the depiction is of a holy statue or processional figure.

Usually, the platform is supported by a pole or column and one of these can be seen on the underside of the coffin trough.

Ta-Kr-Hb was found in fragile status after being targeted by tomb looters throughout history.

The mummy was donated to Perth Museum by the Alloa Society of Natural Science and Archaeology in 1936.

In 2013, Ta-Kr-Hb was transferred to Manchester Royal Children’s Hospital and performed a CT scan and X-rays of her coffin.

Radiographic examinations showed that her skeleton had suffered extensive damage to the chest and pelvis, sometime after the body had been mummified, according to SCBP Perth.