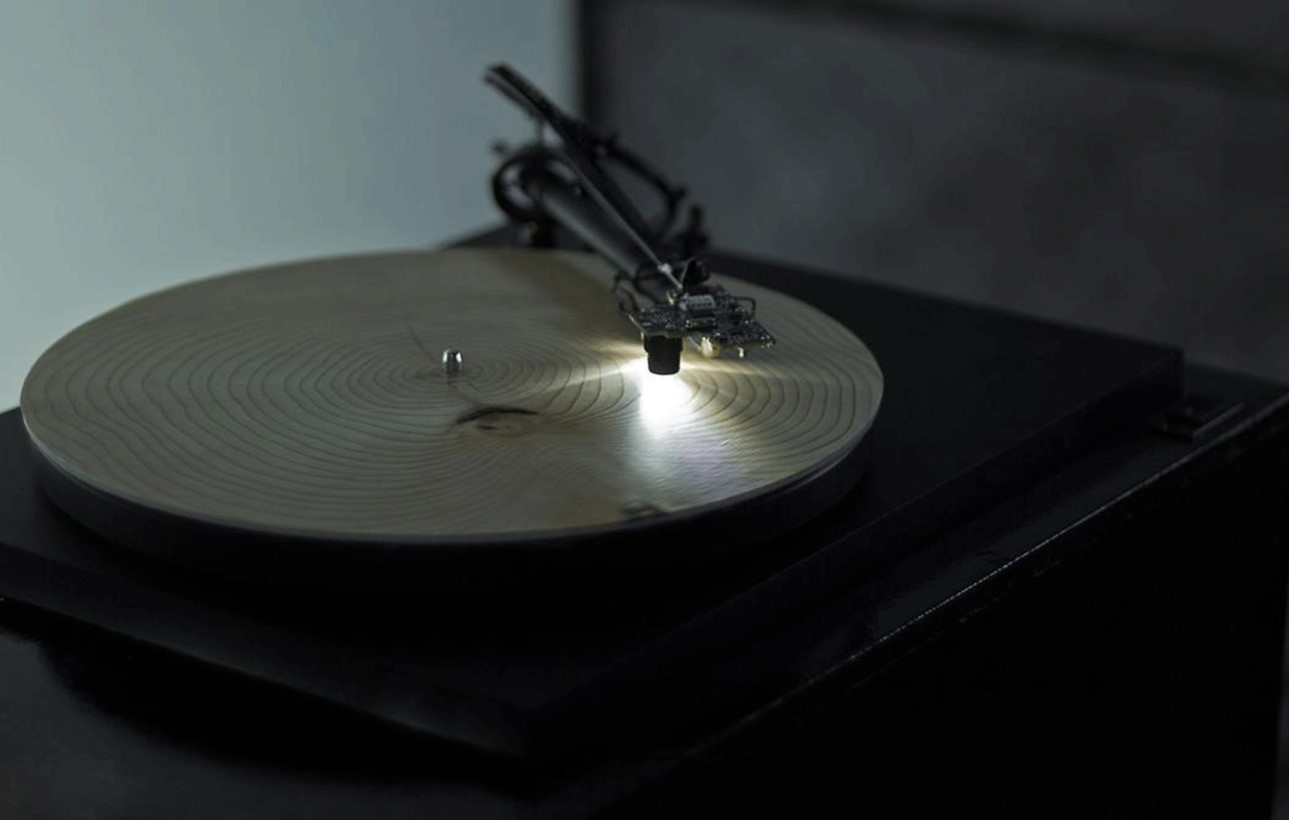 Notes dribble in, staccato, from the higher octaves of a piano. What comes after them is a chord – slightly discordant, but full, with a touch of melancholy. The chord breaks apart with a flurry of arpeggios, before a lone note brings it all to a momentary halt. There’s no telling what the next few seconds will bring, whether a disparate and scattered set of notes will play, or another subtly dissonant chord.

The music may sound like the work of an avant-garde pianist, a piece composer John Cage would be proud of. But behind the track, titled Alnus (Alder), is a tree. An alder tree.

It is the tree’s growth rings – those that denote its age and the climate conditions in which it grew – that compose the music. And hearing it is all made possible by a record player created by German artist Bartholomaus Traubeck.

The equipment can read tree’s ring pattern and transform the visual data into music. The record player analyses the strength of the rings, their thickness and rate of growth, using the information to trigger piano notes. It is, in essence, transcribing the tree’s life into music.

Traubeck calls his record player an installation and has given it the apt name Years. “It uses a modified high-speed camera mounted on the tonearm of a record player to read out the rings and patterns on a cross-cut disc of wood,” Traubeck explains. “The movement of the rings is then translated to piano compositions by a computer in real-time.”

The camera, Traubeck explains, determines if the ring structure is growing, shrinking or moving, as it turns on the record player. The computer then maps those values into musical notes. Traubeck devised a set of rules that maps out the values from the video image and gives them a corresponding musical scale. This means the music coming from the concentric rings sits neatly within one scale. But the data taken from each tree disc interprets this set of rules differently.

“The rule set is actually very simple,” Traubeck says. “But since the patterns in cross-cut trees are rather complex, the resulting signal is as well.”

Traubeck ran into some challenges while developing the wooden “record” discs. Thicker version he made in the early stages of the project would crack and warp quickly, rendering them unusable. He later discovered an Austrian company that specialises in making stable cross-cut veneer (thin slices of wood), which Traubeck found ideal for his record player installation, Years.

“One of the hardest parts was getting actual discs of cross-cut wood, since wood reacts strongly to humidity. That’s why I went with the veneer-method,” he says. He then mounts the custom-made veneer discs on to acrylic, making them even more stable as they rotate on the record player.

Traubeck first developed the project in 2011 and then exhibited it around Europe, the US and Japan. In 2013, Years was admitted into the collection of the Museum of Modern Art in Tokyo. Traubeck also released a Years album in 2013, which comprises of seven tracks, each named after the type of tree behind the recording, including spruce, ash, maple and oak.

Years, for Traubeck, was a way of exploring the time it took for a tree to grow in sound. He says we can already see a visual representation of the tree’s age by its rings, and he wanted to see if there was a way to translate that into another medium.

There is something poetic about Traubeck’s Years, not just in the way it underscores the relationship between music and time, but also in the way it explores how nature records its own memories. Years may be a decade old, but Traubeck’s record player stands the test of time by paying tribute to time itself, transforming the concentric patterns found in age-old trees into music, using a computer and an outdated, yet classic, analog medium.