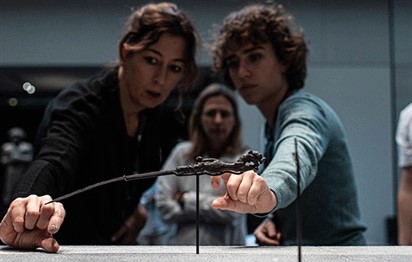 A bronze dagger dating back to 1000BC that was found in the Dubai archaeological site of Saruq Al Hadid is now on display at Louvre Abu Dhabi.

The artefact, on loan from Dubai Municipality, was unveiled at the museum’s Rulers and Warriors, Age of Heroes section on Monday, part of Louvre Abu Dhabi’s display updates.

The dagger, which was found at the ancient site 40 kilometres inland from the Jebel Ali shore, bears a design that suggests it had a noble or wealthy owner. Its handle, made of bronze, is a shaped like a lion striking a fierce pose. The iron blade has been intentionally curved, an unusual feature for such a piece. “It is not a dagger meant for daily usage or function. It’s actually a prestigious weapon,” said Noemi Dauce, Louvre Abu Dhabi’s curator for archaeology.

According to Dauce the lion “is a symbol that we can find often in the weapon because it is mostly a representation of power”. It signifies that the dagger’s owner might have been a high-ranking official or someone in a position of authority.

The artefact is one of many weapons and objects that have been recovered from Saruq Al Hadid since its discovery in 2002. A variety of artefacts that date back to the Iron Age, between 1100 and 600BC – including ceramic vases, semi-precious stones and carved shell ornaments – have also been found there.

The museum’s Rulers and Warriors, Age of Heroes section emphasises the rise of a new aristocratic class that sprang up around 3000 to 1000BC from the Caucasus to the Atlantic and the Baltic to the Aegean. The rise of military endeavours becomes evident in the development of weaponry and innovations in the use of bronze, which was the material of choice for tools, weapons and jewellery around that time.

Bronze, an alloy made of copper and tin or lead, was created by different civilisations that sourced materials from a variety of places. Those in Mesopotamia, for example, sourced their copper from Oman and the Caucasus, while Cyprus and Sardinia supplied the Mediterranean areas.

These parallel histories become more evident in the gallery, following the museum’s methodology of showcasing artefacts of the same period together, regardless of their geographic origins.

Displayed alongside the dagger from Saruq Al Hadid, for example, is an axe blade from the mountains of Lorestan in Iran. The nomadic peoples who created the piece also used the symbol of the lion, with the blade emerging from the animal’s mouth. At the beginning of 2000BC, the Elamites – an ancient people and culture in Iran – considered these weapons to have divine elements.

There’s also a bronze sword with a decorated hilt that was found in France. Dating back to 1600 to 1400BC, it was discovered in the bed of the Seine, and its design – a crescent-shaped guard – reveals highly skilled weapon-making from the European Bronze Age.

Dauce says that the weapon appears to have been buried intentionally, and believes that this was done as a ritual or part of a pilgrimage.

Like the dagger, the sophistication of the weapon’s design suggests that it was used by rulers or warriors to protect their lands.

For Dauce, part of the museum’s goal in presenting these artefacts together is to offer a different way of looking at these civilisations. Though these similarities cannot easily be pointed out as links, they do attest to the various developments that began to spread across the world and how societies responded to them, sometimes in comparable ways.

“We talk today about globalisation and all these networks and connections all around the world, but the idea is to identify that actually these connections existed as early as history and antiquity,” she said. “Even if we don’t understand them fully, there will always be evidence for exchanges and trade.”