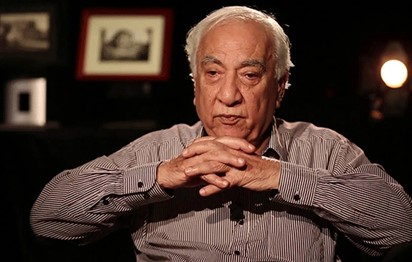 Many Iraqi and Arab artistic entities and stars have mourned famous Iraqi artist Sami Abdul-Hamid – who died on Sunday at the age of 91 – including the government representatives of his country.

Abdul-Hamid was the Arab Theatrical Union president and a multi-award winner.

Abdul-Hamid was born in Samawah in 1928 and left quite a legacy as a writer, actor and director, writing several of books and dozens of research papers in the theatrical arts in addition to translating many others.

The Baghdad University professor in Dramatic Sciences at the Faculty of Fine Arts was also a member of the Iraqi Theater Committee and the Iraqi Center for Theater, as well as the head many other artistic bodies.

Abdul-Hamid held degrees from London’s Royal Academy of Drama Arts, the University of Oregon. He took part in a series of prestigious theatrical festivals as the event’s director in addition to attending as a director or guest.

Among his important theater works are ‘The Epic of Gilgamesh’, ‘Antigone’, ‘Zanj Revolution’, ‘Bernarda House’ and ‘Waiting for Godot.’