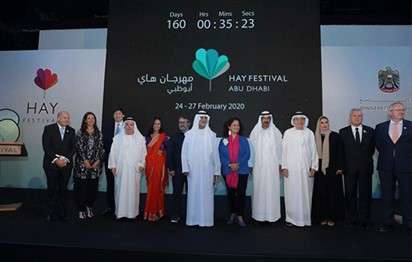 For its first edition in the Arab World, the international Hay Festival will arrive in the UAE on Feb. 24, at Abu Dhabi’s Manarat Al-Saadiyat and other venues across the city, UAE’s Ministry of Tolerance announced Wednesday.

Since 1987, the Hay Festival has launched 125 events globally, attracting more than 4.5 million people to events in 30 locations.

The festival, originally based in Whales, will bring together writers and thinkers from different cultures and backgrounds to discuss ideas, share knowledge and host conversations.

The festival aims to spark imagination and curiosity, from children and young literature enthusiasts to seasoned readers.

The Minster of Tolerance Sheikh Nahyan Mabarak Al-Nahyan said: “Hay Festival Abu Dhabi will be an important initiative of our Year of Tolerance, which celebrates the legacy of our nation’s founder, the late Sheikh Zayed bin Sultan Al-Nahyan, whose tolerance enabled the success we enjoy as a country today.”

“(The event) is not only about bringing the festival to Abu Dhabi, but taking Abu Dhabi to the world,” the international director of the Hay Festival, Cristina La Roche, told Arab News.

The award-winning Syrian poet Adonis is said to be attending the festival and will celebrate his 90th birthday with the participants. “He is one of the world’s greatest poets. He is unquestionably influential not only in Arabic but to poets all around the globe,” Peter Florence, director of Hay Festival, told Arab News.

Other award-winning novelists like the Saudi Muhammed Hasan Alwan and the Omani Jokha Alharthi will also attend the event.