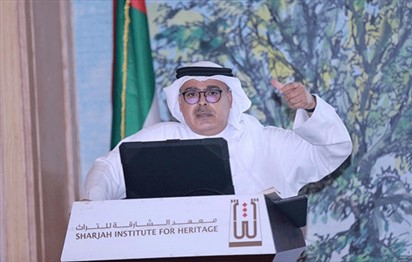 The Sharjah Institute for Heritage (SIH) organised a proactive workshop in accordance with its agenda prior to the launch of the 19th edition of the Sharjah International Narrator Forum (SINF), titled “Cultural Heritage in the UAE: A Vision in the Most Important Sources and Influences”, presented by Dr. Abdul Aziz Al Musallam, Chairman of SIH, in the presence of Aisha Al Shamsi, Director of the Arabian Heritage Centre and elite staff and interested in heritage.

Al Musallam said that the interest in heritage varies according to the cultural level of society, but remains the common denominator among all groups, and the strongest component in the civilisational mobility, highlighting the importance and position of history in the people’s memory and status, and its role in preserving local symbols and events.

The 19th edition of the Sharjah Narrator Forum coincides with the crowning of the Emirate of Sharjah as the World Book Capital of 2019, thanks to the vision of His Highness Sheikh Dr. Sultan bin Mohamed Al Qasimi, Supreme Council Member and Ruler of Sharjah, and his continuous care and unlimited encouragement of culture and intellectuals.

He added that heritage is a tool to communicate the heritage vocabulary to the new generation in a good manner, and consolidate the features of national identity.