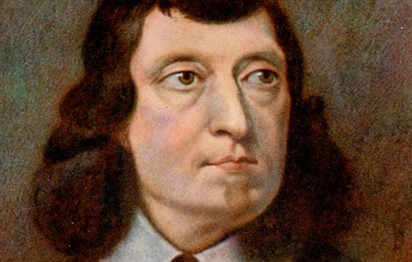 Hailed as one of the most significant archival discoveries of modern times, text seems to show the Paradise Lost poet making careful annotations on his edition of Shakespeare’s plays

Almost 400 years after the first folio of Shakespeare was published in 1623, scholars believe they have identified the early owner of one copy of the text, who made hundreds of insightful annotations throughout: John Milton.

The astonishing find, which academics say could be one of the most important literary discoveries of modern times, was made by Cambridge University fellow Jason Scott-Warren when he was reading an article about the anonymous annotator by Pennsylvania State University English professor Claire Bourne. Bourne’s study of this copy, which has been housed in the Free Library of Philadelphia since 1944, dated the annotator to the mid-17th century, finding them alive to “the sense, accuracy, and interpretative possibility of the dialogue”. She also provided many images of the handwritten notes, which struck Scott-Warren as looking oddly similar to Milton’s hand.

“But I always think ‘I recognise that handwriting,’” Scott-Warren said. “I go and check and normally I’m wrong. This time I thought: ‘The case is getting stronger and stronger’.”

As evidence stacked up, he said he became “quite trembly … You’re gathering evidence with your heart in your mouth.”

The first folio is the first collected edition of Shakespeare’s plays, published seven years after his death. Without it, 18 plays including Macbeth and The Tempest might have been lost to history. Around 750 first folios were printed, with 233 known to survive. They command huge sums at auction, with one selling for £1.87m three years ago.

Scott-Warren has made a detailed comparison of the annotator’s handwriting with the Paradise Lost poet’s. He also believes that the work the annotator did to improve the text of the folio – suggesting corrections and supplying additional material such as the prologue to Romeo and Juliet, along with cross-references to other works – is similar to work Milton did in other books that survive from his library, including his copy of Boccaccio’s Life of Dante.

The scholar tentatively suggested in a blogpost that he might have identified John Milton’s copy of the Shakespeare First Folio of 1623, admitting that, “in this as in other cases, there’s usually a lot of wishful thinking, plus copious spinning of the evidence to make it seem plausible, and elision of anything that doesn’t seem to fit”.

But he soon found that other scholars were agreeing with him. “Not only does this hand look like Milton’s, but it behaves like Milton’s writing elsewhere does, doing exactly the things Milton does when he annotates books, and using exactly the same marks,” said Dr Will Poole at New College Oxford. “Shakespeare is our most famous writer, and the poet John Milton was his most famous younger contemporary. It was, until a few days ago, simply too much to hope that Milton’s own copy of Shakespeare might have survived — and yet the evidence here so far is persuasive. This may be one of the most important literary discoveries of modern times.”

“Everyone’s been weighing in, every day someone suggests a new similarity,” Scott-Warren said. “I feel 100% sure, but there are still people out there who remain to be convinced. I guess there is a question of if other people could have very similar handwriting.”

As well as numerous textual annotations, the folio also contains a host of line markings, showing the annotator’s engagement with, particularly, Hamlet, Romeo and Juliet, Macbeth, The Tempest, Henry IV, As You Like It and King Lear. Scott-Warren believes these can be traced to Milton’s own work.

“The book is absolutely covered with lines in the margin of passages and when you’re reading those thinking the annotator is Milton they become really interesting,” he said. “It’s how they echo with his work, the sense that the volume offers you the opportunity to read Shakespeare through Milton’s eyes. Because the lines in the margin don’t give you any verbal content, you don’t know why he’s singled out a passage for attention, but it forces you to think your way into Milton’s head and it does really chime with a lot of what goes on in his poetry, so you can see him constructing himself through Shakespeare.”

One highlighted section in The Tempest is the song: “Come unto these yellow sands, / And then take hands: / Courtsied when you have and kiss’d / The wild waves whist.” The unusual rhyme, of “kiss’d” and “whist”, is echoed in Milton’s On the Morning of Christ’s Nativity: “The winds with wonder whist, / Smoothly the waters kist.”

“We would already have known about that allusion, they are the only two writers who used that rhyme, but you can see him marking it in the text and responding to it,” said Scott-Warren. “It gives you a sense of his sensitivity and alertness to Shakespeare. What’s quite remarkable as well is that he’s singled out for attention lots of the passages that have become incredibly famous – he goes through and marks out some of the most celebrated Shakespearean speeches.”

It has always been known that Shakespeare was a huge influence on Milton – in his poem On Shakespeare, Milton calls him a “son of Memory” and “great heir of fame”, writing of how “Thou in our wonder and astonishment / Hast built thyself a live-long monument.”

“But this allows us to see the encounter happening,” said Scott-Warren. “It shows you the firsthand encounter between two great writers, which you don’t often get to see, especially in this period. A lot of that kind of evidence is lost, so that’s really exciting.”

He is now intending to collaborate with Bourne on a series of articles about the find. “Having these annotations might allow us to identify further books that have been annotated by Milton,” he said. “This is evidence of how digital technology and the opening up of libraries [could] transform our knowledge of this period.”