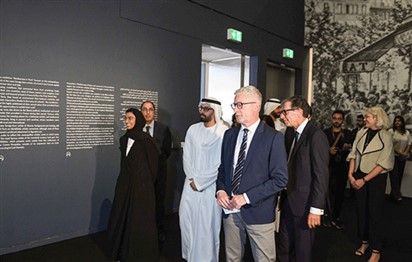 It will open its doors to the public this Wednesday.

Featuring some of the most renowned names of 20th century Avant-Gardes – Pablo Picasso, Marc Chagall, Amedeo Modigliani, Constantin Brancusi, Tamara de Lempicka and others – this marks the most comprehensive display of 20th century avant-garde works to be included in a single exhibition in the UAE, with 85 works on show.

Held in partnership with the Centre Pompidou in Paris and organised with Agence France-Muséums, the exhibition traces the artistic output of migrant artists in Paris in the first half of the 20th century. Through an assemblage of celebrated paintings and sculptures – including Picasso’s portrait of Gustave Coquiot (1901), Modigliani’s Portrait of Dédie (1918), Chagall’s The Father (1911) and De Lempicka’s Girl in a Green Dress (1927-30) – visitors will discover and learn more about the lives and works of these foreign artists in Paris and get insight into the social landscape of the period.

The exhibition introduces Paris at the beginning of the 20th century, a time in which the city saw an extraordinary artistic renaissance due to the influx of painters, sculptors and photographers – many of them women – from across Europe, Asia and the Americas. Driven out of their home countries by political and religious prosecution, as well as economic hardships, they sought artistic freedom and the creative exchange of ideas. France’s liberal regime during the Third Republic, which promoted intellectual openness and tolerance, paved the way for many of these foreign artists.

Rendezvous in Paris: Picasso, Chagall, Modigliani & Co. (1900-1939) traces the emergence of several artistic movements, now known as some of the defining moments in Modern art. One of the first avant-garde movements was Fauvism, exemplified in this show through works such as František Kupka’s The Yellow Scale (1907), Kees van Dongen’s Nini (c. 1909) and Sonia Delaunay’s Philomena (1907). The Fauvists, open to creative risks and inspired by the works of Van Gogh and Gauguin, developed paintings known for their intense and bright palettes. Pieces such as Sonia Delaunay’s Young Girl Sleeping (1907) demonstrate how light and colour are used not only to convey a sense of space, but also emotions.

Rendezvous in Paris: Picasso, Chagall, Modigliani & Co. (1900-1939) also gives prominence to photography, including masterpieces such as Florence Henri’s Shop Windows (c. 1930) and Brassaï’s The Pont-Neuf (c. 1932). With many European and American photographers seeking political refuge or looking to better their economic circumstances, artists such as André Kertész and Ilse Bing developed a new form of photographic Modernism, exemplified in works such as Kertész’s Eiffel Tower (1929).

Visitors will be able to immerse themselves in the evolution and dynamism of the Parisian art scene through a range of interactive and immersive installations, one of them highlights the artists’ journeys from their home country to Paris, another gives insights into the uses of colours by the artists, whilst a recreation of Brancusi’s studio brings to life the sculptor’s environment as well as his relationships with his models and pupils.

Manuel Rabaté, Director of Louvre Abu Dhabi, said: “We are thrilled to see Rendezvous in Paris: Picasso, Chagall, Modigliani & Co. (1900-1939) kick off our 2019/20 season, Changing Societies. A landmark showcase for this region, the exhibition will spotlight a crucial moment in art history. In keeping with our season’s theme, the exhibition illuminates the creative output during a time of enormous political and social upheaval, as well as how the power of intellectual exchange defined the artistic production of a generation. We are grateful to our international partners for the opportunity to introduce such exceptional masterpieces to our visitors and would particularly like to thank the Centre Pompidou for collaborating with us for this show.”

Dr. Souraya Noujaim, Scientific, Curatorial & Collections Management Director at Louvre Abu Dhabi, added: “Rather than just a showcase of artworks, this exhibition transports our visitors back in time, to a moment in history in which artists, sculptors and photographers united with writers, poets and musicians to become part of what is now known as one of the defining moments in the history of Modern art. Far beyond the remarkable masterpieces on show, this is an exhibition about the city of Paris and how it functioned as a stage for creative and intellectual exchange, as well as its key actors – migrant artists from across Europe, Asia and America, who are today known as the avant-garde of Classical Modernism.”

Serge Lasvignes, President of Centre Pompidou, said: “From the outset, the Centre Pompidou has played its part in the extraordinary intellectual and artistic venture that is Louvre Abu Dhabi. Until now, its contribution has chiefly been the loan of the many masterpieces from the holdings of the Musée National d’Art Moderne that have regularly complemented Louvre Abu Dhabi’s own collections, which already include important works by the great 20th-century Western artists. When the time came to decide on what was to be the first of the temporary exhibitions curated by the Centre Pompidou, it was the Louvre Abu Dhabi team who came up with the idea. This is worth underlining, so greatly does the theme of this exhibition resonate with the social and political preoccupations that inform the universal museum designed by Jean Nouvel.”

Christian Briend, Curator of the exhibition, added: “Since the term “The School of Paris” first appeared in 1925, it has been widely used to refer to the extraordinary artistic flowering that resulted from the presence of many painters and sculptors from all over Europe, Asia and America who came to the French capital from the dawn of the 20th century to the Second World War. The artists’ desire to travel to the French capital was sparked by the international aura of the city and its art scene at the time, enhanced by the success of the World’s Fair (Exhibition Universelle) of 1900. Above all, for foreign painters and sculptors, Paris was a centre for all different kinds of art.”