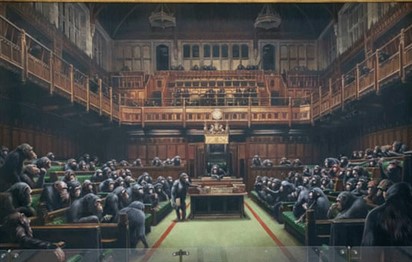 Banksy’s withering view of the UK parliament, showing a Commons chamber packed full of chimpanzees, is to appear at auction for what could be a record amount of money.

The artist painted Devolved Parliament in 2009, when the word Brexit would have baffled people.

But timing is everything. The artwork will go on display in London for the first time later this month at Sotheby’s auction house, less than a mile from the House of Commons.

He said: “Regardless of where you sit in the Brexit debate, there’s no doubt that this work is more pertinent now than it has ever been, capturing unprecedented levels of political chaos and confirming Banksy as the satirical polemicist of our time.”

At nearly 4 metres (13ft), the work is the largest known canvas by Banksy. It is being sold with an auction estimate of £1.5m-£2m. That means it could exceed the record of $1.9m (£1.52m) paid for Keep it Spotless, a Damien Hirst spot painting on to which Banksy stencilled a maid cleaning.

Banksy originally painted Devolved Parliament for his takeover of his hometown museum in Bristol in 2009, a show that attracted more than 300,000 visitors and became one of the top 10 most visited exhibitions anywhere in the world that year.

It was lent earlier this year, by its anonymous owner, to a display at Bristol Museum marking both the exhibition’s 10th anniversary and Britain’s original planned exit from the EU on 29 March.

At the time, Banksy wrote on Instagram: “I made this 10 years ago. Bristol museum have just put it back on display to mark Brexit day. Laugh now, but one day no one will be in charge”.

Banksy recently addressed Brexit in a huge mural on a building in Dover showing a worker chiselling a star from the EU flag. It was mysteriously whitewashed over. He said he had been planning to update it on 31 October, with the blue crumpled on the ground, writing: “Never mind. I guess a big white flag says it just as well.”

Devolved Parliament goes on display on 28 September before its sale on 3 October. It will be the same auction room where Banksy a year ago stunned the art world by activating a shredder moments after one of his works was sold.