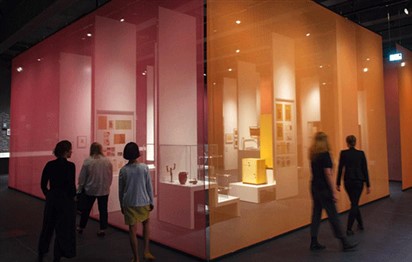 When the Bauhaus arrived in Dessau in 1925, it sent shock waves through the provincial eastern German city. The pioneering and socially engaged art and design school may have been founded in Weimar (a city about 130 kilometres south-west of Dessau) in 1919, but it flourished once it moved to industrial Dessau. In seven years, a school was built in the city, as well as workshops and housing estates that exemplified the school’s experimental and innovative way of thinking and manufacturing, creating a legacy that continues to influence the world of architecture, design and art.

A new Bauhaus museum in Dessau, which opened a week ago, tells the story of what the radical school achieved in the city before it was closed by the Nazis in 1932. The opening exhibition, titled Versuchsstaette (Experimental Locations), features 1,000 works from the Bauhaus Dessau Foundation’s collection of 49,000 pieces and makes as much space for recognised works, such as the innovative chairs and furniture of Ludwig Mies van Der Rohe and Marcel Breuer, as for work created by lesser-known students.

But as Dorothee Brill, who curated the exhibition alongside Regina Bittner and Wolfgang Thoner, says, “before you even see something, you hear something”. She is referring to the audio that greets you in the first room. Media debates from the 1920s about whether the school should even move to Dessau can be heard, as well as remarks about how the Bauhaus represents the future. Given that the mayor at the time, Fritz Hesse, had promised funds for the school’s construction and a sixth of all the city’s building contracts, the backlash wasn’t entirely misplaced. But what angered local contractors at the time has resulted in an architectural legacy that would otherwise not have existed.

The exhibition goes on to explore themes such as prototype production, artistic experimentation and emancipatory thinking through the works of students and teachers alike. Highlights include a replica of Laszlo Moholy-Nagy’s famous motorised kinetic sculpture Light Space Modulator, and the original inventory of 148 works by Bauhausler (the name given to people who attended the school), which was bought from a gallery in Leipzig. Ranging from ceramics to furniture, the items were purchased for the re-opening of the Bauhaus building in 1976 and formed the start of the city’s ever-growing collection. An ugly and atypical chair designed by former Bauhaus student Franz Ehrlich while he was a prisoner in Buchenwald concentration camp, a piece that was used to furnish the camp commandant’s house, is also on display.

The seminal 1938 survey show of the Bauhaus held in New York’s Museum of Modern Art is also covered in detail in this exhibition and highlights how the legacy of a movement can be altered or manipulated. Titled Bauhaus 1919-1928, the Moma show was organised by the founder and first director of the Bauhaus, Walter Gropius, and excluded the final five years of the school under his successors, Hannes Meyer and Ludwig Mies van der Rohe. The exhibition created a narrative around what the Bauhaus was, especially in North America, that was not dispelled for a long time.

The opening of Dessau museum is significant for the city as this is the school’s centenary year, while it also provides 2,100 square metres of exhibition space in which the Bauhaus Dessau Foundation to show its collection, the second largest in the world after Berlin’s. “They have an archive of mostly models and mock-ups from the school era and they are very delicate,” says Roberto Gonzalez, lead architect on the museum’s construction and part of the addenda architects collective in Barcelona. The existing Bauhaus building could not be used as it is listed and cannot be altered.

The idea behind the museum is simple but radical. “It’s a black box in a glass shell,” says director and chief executive officer of the Bauhaus Dessau Foundation, Claudia Perren. The 105-metre-long glass exterior reflects the city on one side and a park on another, while at night the ground floor becomes a beacon of light and activity for all to see. The innovative 99-metre-long concrete “black box” hovers above the airy ground floor without a column in sight, landing only at both ends on 50-metre-tall stairwells made of a steel structure. “It was very brave to do a Bauhaus exhibition space in a black box instead of a white cube,” says Perren.

It is certainly unexpected. It takes a moment to get accustomed to the darkness, which can feel a little oppressive, but exhibition designer Detlef Weitz stands by the decision because “white rooms create many reflecting surfaces and having an entirely black room means we could illuminate pieces exactly as we wanted to”.

It was also possibly the only choice for the designer, given that most of the pieces on display and in the collection are originals that cannot take any sunlight at all. Though encased in glass, the museum is a different proposition from the light-filled Bauhaus building and masters’ houses to the west of the centre. “We didn’t want to compete with the Gropius-designed buildings,” explains Gonzalez.

Its large and flexible factory-­like spaces and bridge-like structure references that of the Bauhaus school, while the fact the museum is made of simple materials – concrete, steel and glass – and constructed on a tight schedule means it also references the Bauhaus movement itself, making the most of limited resources.

The museum in Dessau is one of two dedicated to the school that have opened their doors during the centenary, with the first museum opening in Weimar in April. Another Bauhaus museum will open in Berlin in 2022. The Dessau museum is also a necessary breath of fresh air and investment in a city that has suffered urban depopulation, or the shrinking city effect that is common among many post-industrial towns. The shrinking effect was exacerbated by extensive war damage and uninspiring reconstruction that took place in East Germany.

“The museum is an opportunity to give the city a jolt,” says Gonzalez. “Tourists mainly come for the Bauhaus complex that is separated from the city centre by train tracks. But if everything new only happens in one part of the city, the city will never change and develop.”