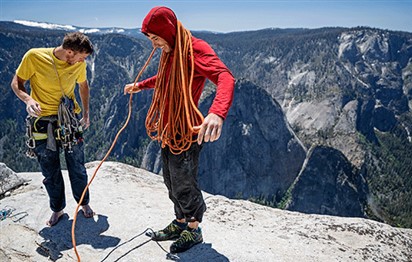 The death-defying documentary picked up every award for which it was nominated at last night’s ceremony, including outstanding directing for a documentary/nonfiction program, outstanding cinematography, sound editing, sound mixing, picture editing, music composition and best achievement in interactive media.

Presented by National Geographic, directed by award-winning directors Elizabeth Chai Vasarhelyi and Jimmy Chin, and co-produced by Abu Dhabi-based Image Nation, Free Solo is a stunning, intimate and unflinching portrait of climber Alex Honnold as he prepares to achieve his lifelong dream.

The Creative Arts Emmys are one of the television industry’s most prestigious awards and recognize technical excellence in television programming.

The acclaimed documentary received glowing reviews from critics, with 25 awards to date and an outstanding 98 percent positive rating on Rotten Tomatoes. It has had a record-breaking box office run that grossed almost US$22 million.

The documentary was produced by Parkes+MacDonald Image Nation alongside Little Monster Films and National Geographic.