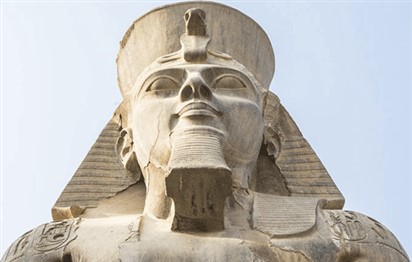 CAIRO: Egypt has begun a new international project in Luxor with the collection, restoration and reinstallation of two statues of King Ramses II.

The plan follows the restoration and assembly during the past three years of three statues of the ruler at Luxor Temple.

During his recent visit to Luxor, Egyptian Minister of Antiquities Khaled Al-Anani gave the green light for the restoration of two more statues of the pharaonic king at the western side of the temple.

Ahmed Arabi, managing director of the temple, said the statues belong to the 19th Dynasty and are made from red granite.

The remains and blocks of these statues were discovered between 1958 and 1961 during the excavations of the archaeologist Dr. Mohamed Abdel-Kader.

The statues, which fell apart years ago, have raised controversy after their restoration. This arises from the fact that one of the recently restored statues stands in the Osirian position, the “death position” of the ancient Egyptians, in which the statue’s feet are equal. That runs contrary to the tradition followed in all Egyptian temples, which is not to put the statues of kings in this position.

Director of the temple Ahmed Arabi said that his department had presented the idea of restoring the three statues. “We recently found pieces of the two other statues of Ramses II in the western facade of the temple. They will also be installed in the same place where they were found.”

Arabi said that the statues will be renovated in cooperation with the Egyptian archaeological mission led by Dr. Mustafa Waziri, secretary-general of the Supreme Council of Antiquities, under the supervision of Ahmed Badr El-Din, of Luxor Temple, and the Chicago Institute of Oriental Archaeology headed by Dr. Ray Johnson. Work has already begun by studying the two statues, assembling their blocks, and documenting and photographing them. Each statue is seven meters high, again in the Osirian position.

Dr. Waziri confirmed that the two new statues have been placed next to the other statues in preparation for restoration, pointing out that there is writing on one of the pieces bearing the name Ramses II. The pieces include the upper half of a statue, two parts from the shoulders overlapping each other, the dress and the statues’ necks. It also has parts of the face.

King Ramses II is one of the most famous monarchs of ancient Egypt, ruling from 1279 to 1213 BC.