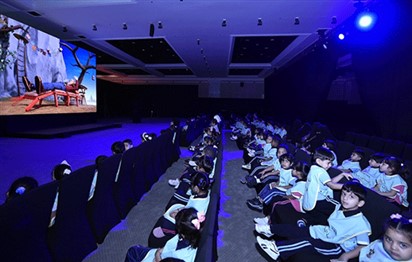 The UAE’s and Arab region’s first film festival that celebrates children’s and youth cinema, the Sharjah International Film Festival for Children & Youth (SIFF), has announced dates of its seventh edition.

Slated for an October 13 – 18 showcase, festival organiser FUNN has confirmed that this edition will offer young cinema enthusiasts a unique opportunity to interact with top Arab and international actors and filmmakers, and enjoy dozens of extraordinary films from around the world created for, by and about children and young people.

FUNN is a Sharjah-based organisation dedicated to promote and support the media arts for young children and the youth of Sharjah and UAE.

SIFF 2019 vision
SIFF 2019 is one of the most anticipated cultural events being organised by Sharjah this year in celebration of its recognition by UNESCO as World Book Capital 2019. The film festival’s main focus this year will be on book-inspired cinema, to show young audiences the role of literature in shaping and nurturing the arts, especially films.

Al Qasimi added: “The event follows the directives of His Highness Sheikh Dr. Sultan bin Mohamed Al Qasimi, Supreme Council Member and Ruler of Sharjah, which stresses on the meaningful inclusion and representation of children and youth in society, and his belief that enlightened individuals play a key role in the development of their societies. To this end, we call on the UAE’s young community to come enjoy SIFF and experience the power of cinema to unleash their creativity. Come explore the infinite creative possibilities offered by the filmmaking industry.”

The festival opens up new horizons for children, young people and young people to showcase their creative work and talents and benefit from experiences of international experts hosted by the festival. SIFF is also a unique platform for filmmaking enthusiasts to unleash their potential and discover more about peoples’ cultures. The event aims to nurture a new generation of creative filmmakers who are able to turn their dreams to competitive Emirati and Arab cinematic productions on a global scale.

Last year, the festival screened 138 films that were selected from among 502 films from almost 54 countries.