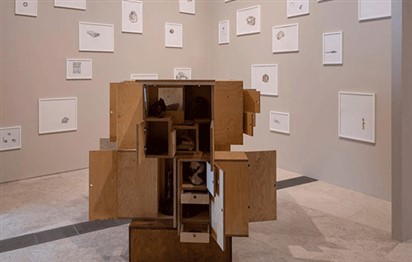 “We aim for the Jameel Arts Centre to be a producer of programmes that are vital and timely,” says Antonia Carver, head of Art Jameel. “A year on from ‘Crude’, which reflected on the centrality yet invisibility of oil, comes ‘Phantom Limb’ — a homegrown, group show exploring material heritage — the destruction, weaponisation, reconstruction and restitution of history, told through the eyes of contemporary artists.

We’ve started to think in parallel, broad thematics that can run through Jameel’s programming for a year or more and, given Jameel’s long-time work in heritage throughout the region, this is one where we can really dig deep and unearth the big debates of our time.”

Phantom Limb takes its name from the phenomenon whereby amputees can still perceive feeling in their lost limbs: the brain signals persist even if their true source doesn’t. Curated by Jameel’s Nora Razian, the exhibition extends this idea towards the relationship between the material world around us and contemporary thought: how do buildings destroyed by war, projects that were never made, or architecture that is a hang over from colonialism, affect the memories and daily lives of those who live among them?

The exhibition includes major artists in the field, such as Khalil Rabah, from Palestine; French-Algerian artist Kader Attia; and research conducted by the agency Decolonising Architecture, as well as younger artists whose works mix politics and perceptiveness, such as Palestinian artist Jumana Manna and the Abu Dhabi-based sculptor Rand Abdul Jabbar.

The Jameel Arts Centre will also use its smaller “artist’s rooms” on the first floor to showcase focused representations of artist’s work. The Bombay-based artist Prabhakar Pachpute brings his explorations of protest art in India, in a new iteration of his “Sea of Fists” project. In installations and painting, he looks at how members of the public use their bodies as weapons in marches and protests.

Abu Abdallah, whose work is receiving increasing attention internationally, will examine the construction of identity in the Gulf, with the outsize influence that online life and domestic space play for its residents. The artist, from the Eastern Provinces, will show some of her existing videos, as well as new painting on textile and a work comprised of living plants — perhaps a complement to the already sensitive take on ecology at the Centre, which worked with a Namibian plant rescuer to create its landscaping.

The art space, which is run by the Saudi Foundation Art Jameel, will also host events that continue the Centre’s “long-term interest in public, site-specific experiences”, as Carver puts it. Primary among these is a major sound work by Egyptian artist Hassan Khan that will be broadcast in the public spaces that surround the Centre.

“Hassan Khan tends to produce works that give themselves up slowly — and the more you peel, the more layers are revealed; yet, like much of our programming, his work has an urgency, in terms of thinking about the times in which we live,” says Carver. “Composition for a Public Park is an extraordinarily public work — it takes up the whole of our sculpture park and weaves a narrative through voice and music in three languages — specially recorded in Arabic and Urdu for this edition of the work.”

The space’s entrance way will also be transformed into the Library of Unread Books, a crowd-sourced project by two Singapore-based artists, Heman Chong and Renée Staal. For this roving artwork, members of the public donate the books they have in their homes but have never read; for the past few months the Jameel has been collecting books from UAE residents, and from November these will become a temporary reference library open to the public.

Other talks include events with NYUAD anthropologist Nathalie Peutz, who will speak about her research in work in Socotra, the island off the Omani coast to which the khaleeji communities once banished women whom they believed to be witches, and a discussion with the Sharjah-based researcher Reem Khorshid, who has been investigating historical trade between Egypt and the Gulf.