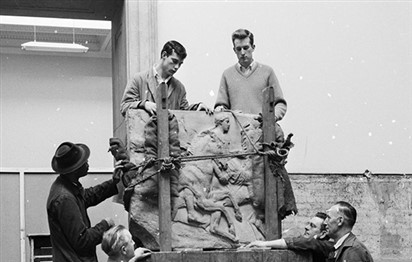 The British Museum is willing to loan out the objects it once pillaged (or bought), but is that enough?

Imagine the British Museum in London without Egypt’s Rosetta Stone. The city’s Victoria and Albert Museum without Ethiopia’s Maqdala treasures. Or the British capital’s Natural History Museum without the scientific wonders that are Gibraltar’s Neanderthal skulls.

After a summer of repatriation requests, the debate over the right of British museums to retain contested artefacts – objects that were often “removed” by British citizens from territories once ruled by the UK during its centuries as a colonial power – has gathered pace. In August, a Jamaican government minister requested that the British Museum hand back objects taken from the island when it was a UK colony. Only a month earlier, renowned Egyptian writer Ahdaf Soueif resigned her position as a member of the museum’s Board of Trustees, citing its “immovability on issues of critical concern”, including repatriation.

But speaking to The National, Soueif acknowledges that “on the issue of restitution there is no one-size-fits-all solution”.

“It has to be a case-by-case deliberation, and the solutions [must] stretch across the whole spectrum,” says Soueif, 69, who had served as a trustee since 2012.

She says the spectrum ranged “from the object remaining where it is in the ‘colonial’ museum, but is provided with an appropriate context, to the object returning to the location where it was made – with lots of varied possibilities in between”.

A history of disputes

Last month, a historic dispute between London and Athens over the so-called Elgin Marbles reared its head once more. Greek Prime Minister Kyriakos Mitsotakis made a request to take the marbles from Britain on loan, with a view to putting them on show in 2021 to commemorate the Greek War of Independence, which began in 1821.

On display at the British Museum, this collection of classical Greek marble sculptures assumed their name after they were acquired by Britain’s Lord Elgin from Greece in the early 1800s. But, according to media reports, the museum’s precondition for any loan would be to acknowledge British ownership of the sculptures, which are about 2,500 years old and known in Greece as the Parthenon Marbles. But former Greek prime minister Alexis Tsipras was critical of the notion, writing on Facebook that, far from asking to simply borrow them, Mitsotakis “should ask for the permanent return of the Parthenon Marbles”.

As a result of its controversial colonial past, Britain has been the target of frequent and varied attempts to return objects seized from regions including the Middle East and Africa in eras gone by.

Take the Rosetta Stone, for instance. This ancient slab of granodiorite was discovered by French troops in 1799 after Napoleon Bonaparte’s invasion of Egypt a year earlier. But after France’s defeat by Britain in 1801, the stone fell intoBritish hands. For more than 200 years, the artefact – inscribed in 196 BC and used to decipher Egyptian hieroglyphs – has been exhibited at the British Museum.

But last year, Tarek Tawfik, director of Cairo’s Grand Egyptian Museum, asked for it back.

“It would be great to have the Rosetta Stone back in Egypt but this is something that will still need a lot of discussion and co-operation,” Tawfik told London newspaper the Evening Standard last year.

How the UK is behind when it comes to repatriation

Today, restitution efforts have become more pronounced as painful attempts by the UK to extricate itself from the European Union continue to stir debate over the country’s place in the world and its colonial legacy.

British-Nigerian historian, broadcaster and filmmaker, David Olusoga, says Britain has often lacked the sense of empathy necessary to understand why its former colonial territories long to see removed objects repatriated. “That is, to imagine what it is like to live in a country in which your national treasures – things that are of historical, cultural and sometimes religious and spiritual significance – are in the museums of other countries,” says Olusoga, who personally advocates restitution. “Often as a result of unfair purchases or historic acts of violence, invasion and colonisation.”

Olusoga, who is also a professor of public history at England’s University of Manchester, says Britain is “behind the curve” as far as repatriation is concerned. While museums across western Europe are filled with treasures lifted during the age of empire and colonisation, some nations have taken steps to right perceived wrongs of the past that took place under British rule.

In May, the German Historical Museum in Berlin announced that it was returning a 15th-century artefact known as the Stone Cross to Namibia. And late last year, a report commissioned by French President Emmanuel Macron called for museums in France to return artworks removed from African nations during the country’s own colonial period.

Why it may not be such a great idea

But not everybody thinks restitution is such a good idea, relevant or even helpful. Tiffany Jenkins, author of Keeping Their Marbles: How the Treasures of the Past Ended up in Museums, and Why They Should Stay There, has challenged the idea that removed objects should be repatriated. She says that asking for artefacts to be returned to “repair the sins of colonisation” is an unwarranted “politicisation of culture”.

She also contends that the clamour for restitution, not least from British critics of UK museums, has arisen from “an insecurity and crisis in the idea of what a museum is for”.

“In recent times, museums have been seen as simply reflecting the elite and offering nothing to anybody else,” she explains. “And the positive things that museums can do – that is showing different cultures and times and places to different people – have been abandoned, or people are not as confident about [their role].”

But a representative for the British Museum tells The National that “internationally, the museum works extensively in partnership with museums across the globe to consider, understand and reflect … complicated shared histories”.

“We lend many thousands of objects all over the world. For example, with regard to our work in Africa, we have committed to lending objects from the collection on a rotating basis to the planned new Royal Museum Benin in Benin City, within a three-year timeframe.”

Soueif has no intention of returning to her British Museum role, saying that “the changes I think are necessary need a younger person who has a lot more time”. But she maintains that the debate about restitution should continue.

“There’s a global conversation that has started and needs to be encouraged,” she says. “It’s about the relationship of the south and the north, about cultural ‘property’ and what constitutes it, and about who gets to determine how objects with cultural or heritage significance are used. It’s a conversation that needs to be entered into with an open mind and with a will to explore the past and the future. ”