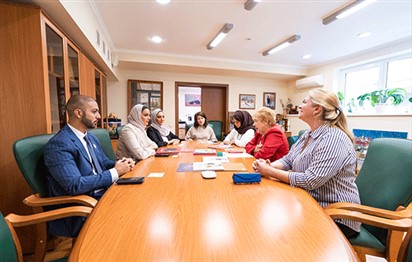 The Sharjah-based non-profit, Kalimat Foundation for Children’s Empowerment, KF, has contributed a diverse collection of Arabic books to the Russian State Children’s Library, to offer children of Arab origin in Russia quality literature in their mother tongue.

This is part of KF’s “Pledge a Library” initiative, which seeks to offer Arab refugee children and those who live in less fortunate communities, access to books. The foundation also helps children develop a fondness for their language and heritage even if they are away from their homelands.

This unique initiative is in parallel to Sharjah’s larger cultural participation as the 32nd Moscow International Book Fair’s “Guest City”, through which the emirate has been sharing with Russians and people from other nationalities the rich heritage and achievements in Emirati and Arab culture.

Amna Al Mazmi, Manager of KF, said, “Latest statistics reveal that 40,000 people of Arab descent live in the Russian Federation, among which 25 percent live in Moscow. These figures demonstrate the value of an initiative such as ours to enrich the knowledge and literary experiences of the Arab community in Russia, especially for the younger generations who are born there. Our books will help them form a connection with their own culture. Additionally, the books will also satiate the growing interest among the Russian community to learn Arabic and teach their children too.”

Maria Vediniapina, Director of the Russian State Children’s Library, said, “The Russian State Children’s Library extends its profound appreciation to the Kalimat Foundation for its valuable gift of a unique collection of high-quality children’s books, which add so much value to our library’s resources with more foreign-language content, amazing illustrations and new printing techniques.”

The Russian State Children’s Library is the nation’s largest repository of children’s literature, visited annually by 45,000 people, with another 1.2 million accessing its website.