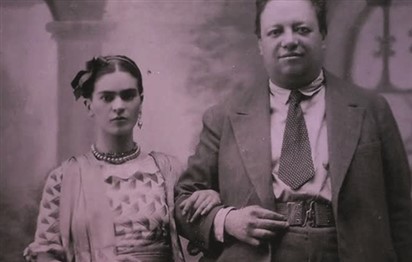 The passionate artistic world of Mexican artists Frida Kahlo and Diego Rivera takes centre stage at a new exhibition set to open at Mexico City’s Dolores Olmedo museum to mark the 25th anniversary of the art gallery, which is housed in a picturesque Hacienda, originally dating from the 16th century in the city’s southern extreme.

The display – with a revamp of the museum’s permanent collection – is dedicated to married couple Kahlo (1907-1954) and Rivera (1886-1957), whose works are presented side-by-side to show how intertwined the pair were, and to introduce their art and universe — different yet complementary — along with their attachment to Mexico.

Kahlo is today one of the most popular artistic figures of 20th century Mexican and her turbulent life was turned into a 2002 movie staring Salma Hayek.

The exhibition shows that her life and works cannot be separated from those of Rivera and together they became legends of 20th century Mexican art, despite their different styles.

The Dolores Olmedo Museum opened its doors to the public on September 17, 1994. The museum was conceived by Dolores Olmedo Patino, a Mexican businesswoman, philanthropist and musician, known for her close relationship with both Rivera and Kahlo. The museum holds the largest collections of Diego Rivera and Frida Kahlo in the world.

The exhibition – which will feature 27 Rivera paintings and 20 Kahlo paintings – opens from September 7.