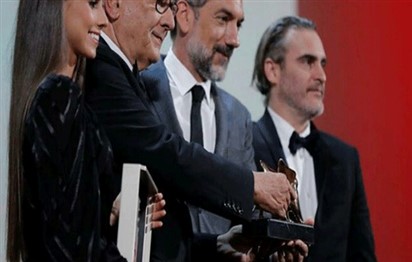 The movie, which The Guardian had described as “one of the boldest Hollywood productions for some time”, has already sparked a heated debate on social media.

Some have warned that Phoenix’s full-throttle portrait of a needy, embittered clown who lives with his mother could empower incels (or involuntary celibates), the angry, misogynist young men blamed for so much far-right and white supremacist violence.

But most critics disagreed, with Variety’s Owen Gleiberman saying Phoenix remade Batman’s arch-enemy as a “Method psycho, a troublemaker so intense in his cuckoo hostility that even as you’re gawking at his violence, you still feel his pain”.

His voice shaking with emotion, director Todd Phillips paid tribute to his star as he lifted the prize, saying Phoenix was “the fiercest and bravest and most open-minded lion that I know… Thank you for trusting me with your insane talents.”

Almost as many headlines are likely to be made by Roman Polanski, who won the Grand Prix second prize for his Dreyfus Affair drama, “An Officer and a Spy”.

After his selection in a main competition that featured only two female directors sparked fury from feminists, he was accused of drawing parallels between himself and the persecuted French Jewish army officer whose story he tells in his film.

Polanski, 86, has been shunned by Hollywood for decades after he was convicted of drugging and raping a 13-year-old girl.

He did not show up at the festival, leaving his wife, French actress Emmanuelle Seigner – who also appears in the film – to pick up his prize to muted applause and a few isolated boos.

The head of the Venice jury, Argentinian director Lucrecia Martel, earlier had to make an embarrassing about-turn after boycotting a gala dinner for Polanski, only to be forced to clarify that she was not prejudiced against his film.

In a year fraught with controversy over sexual politics, festival director Alberto Barbera was accused of being “tone deaf” to the issue.

He included both a Black Lives Matter drama by the American Nate Parker, who was embroiled in a rape trial while at university, and the director’s cut of Gasper Noe’s 2002 rape shocker “Irreversible”.

And Barbera added fuel to the fire by saying he “wished he had got” Woody Allen’s latest, “A Rainy Day in New York” for the festival.

Politics was everywhere in the closing ceremony just as they had been throughout the festival.

Best actor winner Italy’s Luca Marinelli and his female counterpart Ariane Ascaride of France dedicated their awards to the migrants who “rest forever at the bottom of the Mediterranean Sea”.