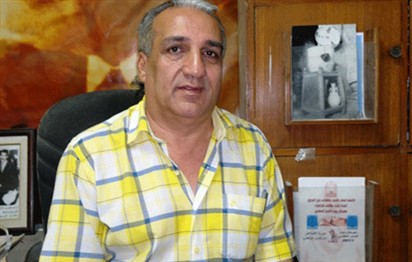 Secretary General of the Iraqi Writers Union, poet Ibrahim Khayyat, has died in a traffic accident in Duhok governorate, Iraq. He was 59.

Literary and cultural circles in Iraq and abroad have lamented Al Khayyat’s death, as he is a very recognized cultural figure. Over the past decade, the late poet had always claimed the highest number of votes in the Union’s elections. He was also preparing a Ph.D. in Media Studies at the University of Baghdad after obtaining his M.A. in Cultural Journalism.

Al Khayyat was born in 1960, and started writing poetry at a young age. He has one poetry collection titled, “Jumhuriyyat Al Burtuqal” (The Republic of Oranges). He also worked in the field of journalism, and was a journalist at “Tareek Al Sha’b” newspaper.

Al Khayyat’s death was a blow to the literary and journalistic community. Messages of condolences have been pouring in from all over Iraq and the Arab world.

The last thing posted by Al Khayyat on his Facebook page 5 hours before the announcement of his death was the song “Ya Rayt” (If Only) by Lebanese singer Fayrouz (Lyrics by late Lebanese poet Joseph Harb), which is a monologue of the poet explaining the reasons behind his departure and his simple wishes in life of sharing a home with his beloved. Thousands of Al Khayyat’s fans bid him farewell in comments on his final post.

Later in the day, the President of the Republic, Dr. Barham Salih, released a statement lamenting Al Khayyat’s death, which said:

“With hearts full of patience and faith, all Iraqis are saddened by news of the departure one of the icons of Iraqi literature; Mr. Ibrahim Al Khayyat, Secretary General of the Iraqi Writers Union. The late Al Khayyat had always written about the worries and concerns of the Iraqi people and their suffering and will be greatly missed. May Allah rest his soul in peace and grant him Jannah and may He inspire patience and acceptance in the hearts of his family and loved ones. Indeed, to Allah we belong and to Him we shall return.”