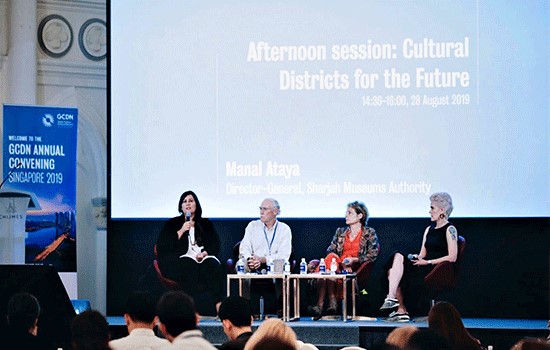 The Director-General of Sharjah Museums Authority (SMA) recently highlighted Sharjah’s flourishing art and culture scene during her participation in a cultural development forum in Singapore.

During this year’s annual meeting of the Global Cultural Districts Network (GCDN), Manal Ataya shared Sharjah’s model, which had successfully transformed the emirate over the past three decades into the centre for cultural production and education.

Sharjah’s commitment to culture is unparalleled giving it a respected reputation globally for its dedication to funding the arts including establishing 18 museums and creating longstanding successful events such as the Sharjah Art Biennial and Sharjah International Book Fair to name a few.

The three-day summit, which kicked off on August 27th , brought together global leaders and thinkers in art and culture who discussed the importance of promoting creativity across the visual and performing arts, and strengthening international ties.

Established in 2013, GCDN is a federation of global centres of arts and culture on a mission to foster co-operation and knowledge-sharing among the world’s leading cultural districts.

It’s an independent association committed to improving the quality of urban life through the contribution of arts, culture and creative industries.

From among more than 250 delegates from across the globe, Ataya was a panellist in the Cultural Districts for the Future session, which looked at the responsibilities of cultural institutions to further engage with their communities.

The discussion covered a number of important areas including, how do cultural leaders respond to the needs and wants of their neighbouring communities and how do they balance the need for commercial income with the need to provide access for local communities.

During the session, Ataya showcased museums’ social responsibility and shed light on SMA’s initiatives that are designed to target all community members with a focus on making museums accessible to all.

This year’s meeting was co-hosted by GCDN member National Museum of Singapore and held in partnership with the British Council, The New York Times, Wordsearch, the Urban Redevelopment Authority, the Centre for Liveable Cities, and the Asian Civilisations Museum.